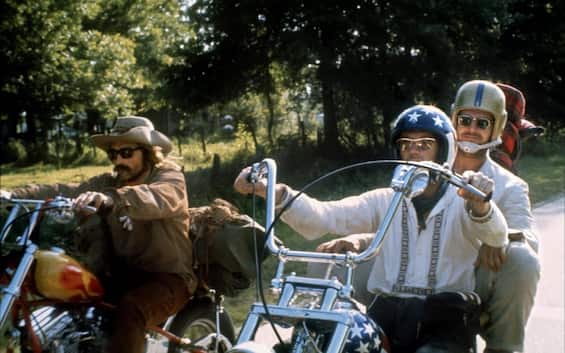 Easy Riderthe film of 1969 by Dennis Hopper, marked an era for his nonconformist soul and the ideal of freedom on the dusty American roads. News from a few hours ago reported by Variety is that it would be developing a cult reboot, produced by Kodiak Pictures, Defiant Studios and the Jean Boulle group which owns the rights to adapt the project originally from Columbia Pictures.

Easy Rider: the plot of the original film

Peter Fonda and Jack Nicholson they interpret two young rebels who, after transporting a load of cocaine from Mexico to the USA, decide to jump on their motorcycles and invest their savings for a journey in search of freedom. Along their way they will encounter prejudices, intolerance and other contradictions of the American society of the 70s. Drugs, hippies, racism they mark the various stages of their journey, but the two keep the course until the end. A Thelma & Louise to the masculine that has marked the history of road movies and cinema up to today.

Easy Rider it has been credited in America as an evolving sociopolitical portrait of the overseas country, through the lens of restless, progressive youth. Hopper wrote this two-wheeled adventure with Peter Fonda and Terry Southern, although the film is also known for propelling Jack Nicholson into the Hollywood Olympus. The producers of the reboot are looking for bold writers and directors to be involved in the project to readjust the original story to current times, while maintaining the same fringe spirit. “Our goal is to build a story about the counterculture and narrative of freedom that the original left us, and to give today’s youth a film that lends serious pay attention to their countercultures and challenges,” Fadida told Variety. “What today’s young viewers are experiencing in their daily lives may seem crazy to the older generation, but it may very well become the social norm, as was the case with the culture shift of the late 1960s. We hope to play a part in this change.”

The success of Easy Rider

In his time Easy Rider He obtained two Oscar nominations and competed for the coveted prize of Golden Palm of the Cannes Film Festival. It is ranked as one of the top 100 films of all time by the American Film Institute. The project also grossed $60 million at the worldwide box office on a reported budget of $400,000.