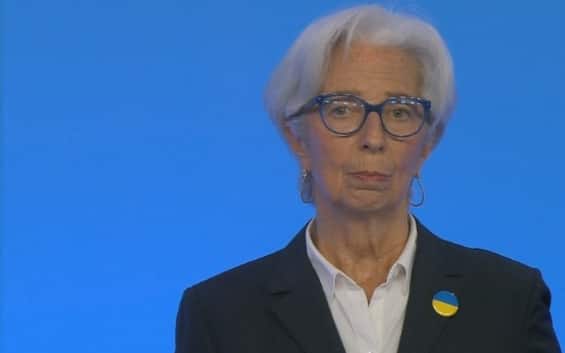 The president of the European Central Bank in a speech in Ljubljana explained that after the first rate hike, “the normalization process will be gradual”, evoking a structural change in inflation in the face of which “it is right for monetary policy to return to a more normal set-up “

The first rate hike by the ECB “will take place some time after” the end of net purchases of securities. ECB President Christine Lagarde said in a speech in Ljubljana that they have “not yet precisely defined the notion of ‘some time’, but I have been very clear that it could mean a period of only a few weeks”. Opening to the possibility of a first interest rate hike in the euro area at the meeting on 21 July, Lagarde added that after the first rate hike, “the normalization process will be gradual”, evoking a structural change in inflation of against which “it is right for monetary policy to return to a more normal order”.

“Estimates of inflation in line with the 2% objective”

“Inflation estimates are at or above 2%, according to a number of projections. And our inflation projections increasingly indicate that inflation is in line with the MTO.” In Ljubljana at the 30th anniversary conference of the Bank of Slovenia, Lagarde explained that the ECB’s commitment to price stability “will help ensure that inflation returns to 2% once the various supply shocks are overcome. Furthermore, the ECB has consistently emphasized optionality in its monetary policy, which creates room to respond to inflation surprises in a timely and efficient manner. ”

The effects of the conflict in Ukraine

Faced with uncertainty about growth, he stressed that “gradualism and flexibility will remain important”. “Gradualism on the pace of monetary policy adjustment and flexibility to ensure the smooth transmission of monetary policy as needed – he continued -. The April Governing Council decisions reflect these characteristics, while providing a well-defined sequence of events for the normalization “. Number One of the Eurotower focused on two permanent effects triggered by the conflict in Ukraine. “The war is likely to accelerate two ongoing structural changes which, during the transition they entail, could lead to further negative supply shocks and cost pressures. First, as I recently argued, the war it could prove to be a turning point, causing geopolitics to become more important to the structure of global supply chains. “