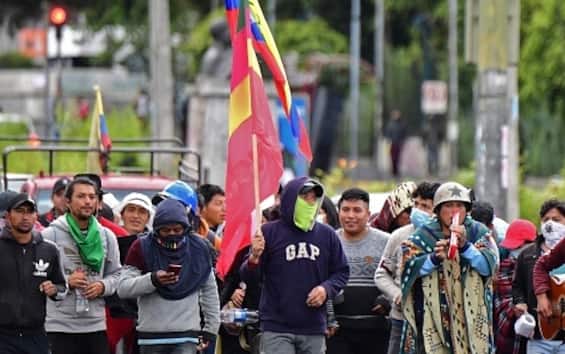 Protests continue in Ecuador against the rising cost of living. For two weeks, about 14,000 indigenous people have demonstrated along the streets of the cities asking the government to lower fuel prices. The violence has so far resulted in six deaths and dozens of injuries. The capital Quito is paralyzed. According to the police there are about 10 thousand demonstrators along the streets of the city where access is blocked by numerous checkpoints. The situation is critical throughout the country. There are 19 out of 24 provinces in the country semi paralyzed by barricades and roadblocks. The Ministry of Energy announced that “within 48 hours the country’s oil production will be suspended due to vandalism, occupation of wells and roadblocks that prevent the transport of supplies and diesel needed to continue operations”.


Oil production is at a critical level

The government speaks of a 50 percent reduction in production “which stood before the outbreak of protests at around 520,000 barrels a day”. The announcement yesterday by Ecuadorian President Guillermo Lasso that he ordered a drop in fuel prices of 10 cents per gallon did not have the desired effects. A figure lower than the requests of the thousands of indigenous people who have protested since 13 June. This reduction will bring the price of diesel to $ 1.80 and gasoline to $ 2.45, while the powerful Confederation of Indigenous Ecuadorians (Conaie) had asked for a price drop to 1.50 and 2.10 respectively. dollars.

Debate on the dismissal of President Lasso

In less than a year in the South American country, diesel has risen by 90% and gasoline by 46%. “Ecuadorians who seek dialogue will find a government with an outstretched hand. Those who seek chaos, violence and terrorism will find the full force of the law” assured Lasso. Meanwhile, in Parliament there is discussion about his possible impeachment. The president of the Ecuadorian Parliament, Virgilio Saquicela, has ordered a new suspension of the ongoing debate concerning a petition for the dismissal of President Guillermo Lasso presented by the opposition party Unes as part of the anti-government mobilization of Ecuadorian indigenous peoples. A third has been updated sitting for tomorrow.