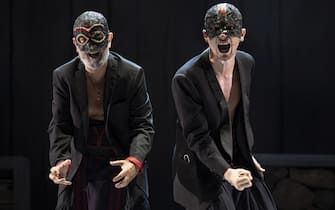 “Oedipus re, Una favola nera” arrives in the national premiere, the show by Ferdinando Bruni and Francesco Frongia with Edoardo Barbone, Ferdinando Bruni, Mauro Lamantia, Valentino Mannias, with costumes by Antonio Marras. A visionary and musical journey in the company of Oedipus, “the one who dreams deep dreams”. From March 15th to April 14th at the Elfo Puccini Theater in Milan. Below is the gallery with the photos of Lorenzo Palmieri

Ukraine, other dates in Italy for Alice in Wonderland at Circus-Theater Elysium

Ferdinando Bruni and Francesco Frongia continue their search for disturbing signs and with a contemporary look they try to reinvent the rite of tragedy. In a first study, entitled Towards Thebes, which went on stage in February 2020, had launched an investigation into the myth, starting with Sophocles and opening up to the innumerable variations and readings that are scattered throughout the literature to date. That concert of voices, with the actors reading the parts, was a prelude to this new one Oedipus the King.

Ukraine, the Odessa Opera plays the Va Pensiero outside the theater

In a wooden environment, dominated by light colors and scattered with sand, stones and paper, 4 actors give body and voice to all the characters. Ferdinando Bruni and three highly talented actors ‘under 35’ multiply their appearance thanks to the precious masks of Elena Rossi and the material costumes of Antonio Marras, which themselves become scenographic presences, now monstrous, now shining. Characters, objects and signs “remove the story from any realism to bring it closer to a shamanic and dreamlike dimension, capable of moving and speaking to the unconscious”.

Ukrainian War, the journey of the jazz musician to help her relatives who fled to Poland

An exhibition set up in the foyer of Elfo Puccini introduces the viewer to the atmosphere of the show: DRESSING THE MYTH – Drawings and preparatory studies by Antonio Marras for Oedipus the King.

Scala, Chailly directs Rossini’s Stabat Mater for the populations affected by the conflict

Director’s notes: “Our journey to Thebes is a journey through one of the most famous legends that come to us from the remote, yet very close, world of Greek civilization: theOedipus the king. A story that has the trend of a fairy tale, complete with a prince / child abandoned in the mountains by a shepherd who had received from two distorted parents the order to make him die, with the killing of a monster by the child, in the meantime he has become a fearless knight, with the prize of a beautiful queen in bride and a king’s crown “.

“A black fairy tale, mind you, an infernal machine (as Cocteau calls it), an unstoppable mechanism in which every line, every word becomes bristling and quivering with painful irony and ambiguity. The king unmasks himself and discovers himself as a monster, everything that seemed glorious in him reveals itself to be contaminated by horrible sins and marks the fate of that same city that had proclaimed him sovereign. he will gouge out his eyes. ”

Ukrainian War, the Kiev orchestra plays the Ode to Joy in Maidan

“The fate that overwhelms him required a great degree of complicity on his part, each step he took to get away from a tragic ending has instead brought him closer to his unhappy ending and it is precisely in this relentless mechanism that the irony of fate lies. : trying to escape our fate we conspire with him. Oedipus lives in a perennial contradiction caused by what he knows, but above all by what he does not know he knows and this trap eventually snaps on him and leads him to the very place he would be from. wanted to escape “.

Russia-Ukraine war, the reactions of the entertainment world

“The tragedy gives voice to the complex relationships that exist between freedom and necessity, which are among the founding values ​​of our being human and represents for us, creatures of the twenty-first century, a challenge that confronts us with everything we cannot control. with the weapons of reason, great myth of modernity. In tragedy the conception of time as a linear flow is overturned “.

“The past is not the past, the future folds in on itself and the present is crossed by reverberations of the past and the future that destabilize it. Even if the tragedy comes to us from a distant world, even if its stories are inspired by even more narratives. remote, it is difficult to imagine anything more suited to our age than this art form that describes the transition between an old world that is disappearing and a new world that we still know very little about. ”

“Oedipus knows something from the beginning, but refuses to see and hear what is said to him. It will be Tiresias, the blind diviner, who will reveal to him that the cause of the impurity he is trying to eradicate from the world he must look for it in himself. But Oedipus does not listen to his words and, blinded in turn by a very contemporary arrogance, refuses to see and understand. In this way, from solver of enigmas he becomes an enigma himself “.

“The norm is subverted and the human being who tries to contrast events is overwhelmed, passing from agent to acted, from innocent to guilty, becomes something disconcerting, incomprehensible and monstrous”.

“In this ours Oedipus we try to reinvent with a contemporary gaze a ritual of which we know very little in the end: the use of masks, for example, perhaps instituted for religious reasons, in order to abandon individual identity in order to achieveékstasis, (ἔκστασις), the ‘coming out of oneself’ becomes for us a tool to help the actors in a different path of identification; just as the all-male cast takes us away from any temptation for realism to bring the story to an almost shamanic dimension “.