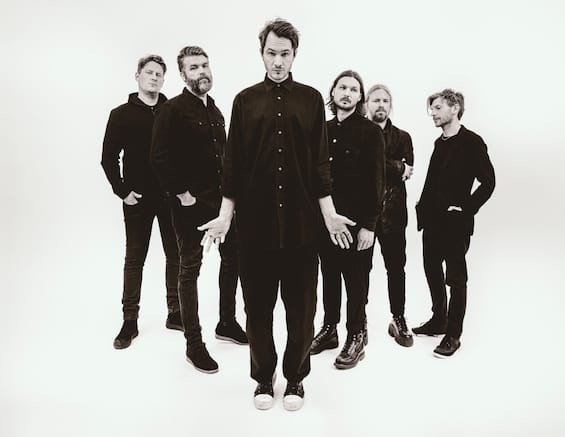 After the great success of the summer date at the Balena Festival in Genoa, the Editors, one of the bands most loved by the Italian public, are back in Italy for two unmissable concerts organized by DNA Concerts: Thursday 20 October at the Fabrique in Milan and Friday 21 October at the Unipol Arena in Casalecchio di Reno (BO). The two autumn events in our country will be an extraordinary opportunity to listen live EBMthe group’s seventh studio album released on September 23 via Play It Again Sam. Anticipated by individuals “Heart Attack” And “Karma Climb“, EBM is the first album released after the official entry into the English formation – led by the charismatic frontman Tom Smith to which are added Justin Lockey, Elliott Williams, Russell Leetch and Ed Lay – di Benjamin John Power aka Blanck Massformer member of the electro-noise duo Fuck Buttonsafter a collaboration of over five years which culminated in participation as an additional producer on the previous album “Violence” and in the publication of “The Blanck Mass Sessions”, containing the versions of the songs made during the recording sessions carried out together.

A disc that has already received the consent of the public and critics e ushers in the new era of one of the most relevant, intriguing and enduring bands on the English scene. A band that, in 17 years of career, has never stopped. In fact, the album confirms the trend towards change and sound research, starting from its title: EBM in fact it is not only the acronym of Editors and Blanck Mass, but also a deliberate reference to Electronic Body Music, the sound born in the Eighties and which has enormously influenced the new material of the group, where industrial synths along the lines of groups like Nitzer Ebb, Front 242 and DAF hammer heavily between strobe lights, smoke machines and the smell of leather and of the skin. Power’s entry into the band also meant that, for the first time in Editors’ history, songwriting didn’t start with frontman Tom Smith, who called Blanck Mass’s graft “an adrenaline rush in our process. creative”. The opportunity therefore to shuffle the cards again and to reach a completely new meeting point between the more pop soul of a noise producer and the goth-rock roots of a band capable of filling stadiums.

The two live stages in Italy are part of a 15-date European tour scheduled for October. In the first months of 2023, however, they will be traveling around the United Kingdom and Ireland, with a stop at the iconic Troxy in London. This tour will give Editors the opportunity to take the new songs exactly where they should be: on stage, because as Powers explained: “This new album is very physical. EBM was born from the idea of ​​creating a connection with the public and occupying a physical space. There is also, at the same time, an emotional physicality: an urgency and a sense of panic. There is agitation. Even in its most delicate moments, there is always a strong desire to get closer ”.

The Editors they have never stood still on a creative level and, ever since they took their first steps as a simple band made up of friends from universities in Birmingham, they have always tried to surprise and never write predictable albums, without fear of unsettling their audience. If with the first two splendid albums – the debut “The Back Room” of 2005 which received a nomination for the Mercury Prize and the second “An End Has A Start” (2007) able to reach the first position of the British charts – the Tom Smith’s band had been included in the ranks of the indie rock bands of the Zero years (Franz Ferdinand, Bloc Party, Interpol), already from the synth turn of “In This Light and on This Evening” in 2009 it became clear to everyone that the Editors did not they could be pigeonholed into a single musical strand.

Indie rock, post punk, new wave, synth pop, stadium songs: the English band has put together all this with personality, in twenty years of career always lived at the highest levels of creativity and public response. Not surprisingly, all of their previous albums have been in the Top 10 UK, and two have finished at # 1. Their latest tour in 2020 saw them perform at Wembley OVO Arena for the biggest headlining show ever, thus demonstrating how their audience has always been steadily growing. They have always had great success on the other side of the channel as well, with sold out dates and headlining performances at various festivals in Europe and around the world. The secret of their longevity could be the ability to continually evolve in sound, while always remaining firmly rooted in their vision, as they have once again demonstrated with EBM.