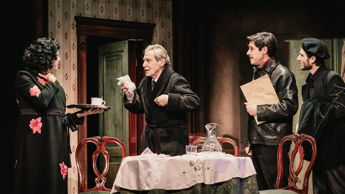 The actor and director on stage with two unique acts by the Neapolitan playwright: ‘Pain under the key’ and ‘Sik-Sik the magical creator’

Carlo Cecchi goes out of his way to play Eduardo De Filippo. The actor and director is on stage until 23 December
to the Argentina theater in Rome with two unique acts by the Neapolitan playwright: ‘Pain under lock and key’ And ‘Sik Sik the magic maker’, flanked in both performances by Angelica Ippolito and, among others, from Vincenzo Ferrera. A production by Teatro di Roma, Marche Teatro, Elledieffe. The words, the grimaces, the gestures, the typically Edwardian silences come to life in the interpretation of Cecchi, who pays homage to the Neapolitan Master without attempting improbable replicas but also without betraying his distinctive sign.

The two works offer two different comedy timbres, the first suspended between the absurd and the farcical, the second decidedly and popularly comic, with at the center the theme of death: the physical one, in the first case; the artistic one in the second. If in fact in ‘Pain under the key’ it is a question of investigating the inscrutable motives that lead a sister to hide the news of her wife’s death from her brother for a year, in order not to cause fatal trauma due to the disappearance of the woman she loves; in ‘Sik Sik the magic artifice’ to die amidst laughter is the art in the sleight of hand of an unlikely ‘magician’ due to his even more unlikely accomplice fictitiously caught at random from the audience.

“Eduardo seems to tell us that death runs its course, bringing with it a load of mourning, but man has no choice but to face it because even death is part of life and trying to deny it means denying life itself – he stresses Carlo Cecchi in his director’s notes – As well as the human and comic story of a penniless illusionist, a wizard from overwork, brings with him the bitter aftertaste of failure“, which after all also borders on death.