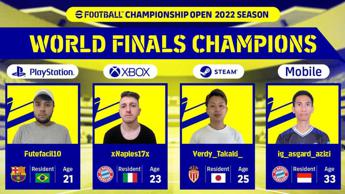 Konami Digital Entertainment has announced the results of this year’s eFootball Championship Open, a competition that featured some of the best eFootball players in the world, vying for the title in their region and platform. The eFootball Championship Open is an amateur competition in which players from all over the world can participate freely. The competition was divided into three geographical regions: Asia, Oceania and other areas, Europe and Africa, the Americas. Each region was then divided into four groups according to the platforms in use: PlayStation, Xbox, PC and mobile. Six players per platform (two per region) were eligible for the World Finals. Each year the competition serves as a gateway for amateur players who want to show their skills to professional clubs, This year’s eFootball Championship Pro featured former Open players such as Mucahit of Galatasaray, Gagliardo28 of AS Roma and Nezka, MVP of the tournament, of AS Monaco. The World Finals saw a series of 1v1 matches between the bottom six finishers on each platform, culminating in the victory of the four champions. The winners of each platform are the following: PlayStation, Futefacil10; Xbox, xNaples17x; PC, Verdy_Takaki_; and finally mobile, ig_asgard_azizi. xNaples17x, the Italian winner of the Xbox category, commented: “I am really excited about this great experience. It was very difficult for me because I played against very strong players, so the satisfaction is even greater.”