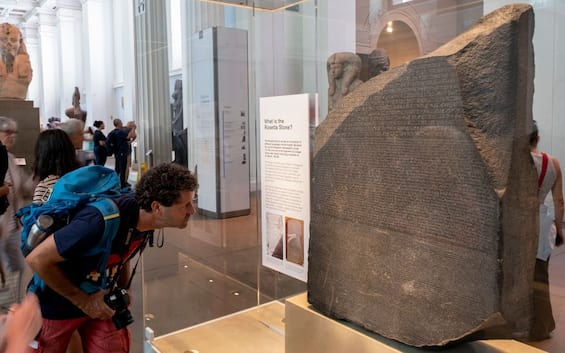 The Rosetta Stone must go home to Egypt. Monica Hanna, dean of the “Arab Academy for Science, Technology and Maritime Transport” asked for it in an online petition. The world-famous artifact, kept in the British Museum in London since 1802, was essential for deciphering the Egyptian language as it bears the same inscription in three different languages, demotic, hieroglyphics and ancient Greek. As reported by The Times and Al Jazeera, thousands have already joined this appeal for what is called the “looting of a war booty”, transported from Egypt to Great Britain.

Appeal by thousands of Egyptian citizens

Thousands of citizens in Egypt have been demanding the return of the Stele for years, including Zahi Hawass, the former Egyptian minister for antiquities affairs, who has collected more than 100,000 signatures in a petition. The important find dates back to the period of the campaign in Egypt and Napoleon Bonaparte, which had the objective of hitting British interests in the Mediterranean. It is believed that it was the French Captain Pierre-François Bouchard who found it in 1799. When the French raised the white flag in 1801, the Stele was taken by the British as a spoil of war.

British Museum: None requested by the Egyptian government, duly acquired

After pointing out that the Egyptian government has never made any request regarding the return of the artifact, the British Museum defended the acquisition of the Rosetta Stone by explaining that the 1801 treaty, under which the Stone was also taken from the British, had been signed by an Ottoman admiral who had fought alongside the British against France. According to the British, that signature represents the approval of Egypt itself, as the Ottoman sultan ruled Egypt when Napoleon’s invasion took place.