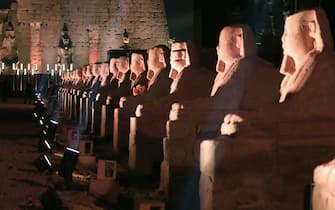 Egypt has staged a spectacular new enhancement of his archaeological heritage. To be involved this time is Luxor, a city located on the east bank of the Nile, in southern Egypt, on the ancient site of Thebes, the capital of the pharaohs in their heyday, from the 16th to the 11th century BC

It was indeed the famous “Avenue of the Sphinxes” reopened in the presence of the Egyptian head of state, Abdel Fattah al-Sisi, who visited the Luxor temple with the guidance of the Minister of Antiquities, Khaled al-Anani

The reopening to the public of the ancient site comes after the translation of the mummies of the pharaohs in Cairo, which took place last April

Egypt, 22 mummies parade in Cairo: it is the parade of the Pharaohs

Almost ancient 3,000 years and more than 2,700 meters long, the newly restored road connects the iconic ones Egyptian temples of Karnak and Luxor and is very famous for about 1,200 sphinxes traditional and crycephalic (with the body of a lion and the head of a ram), lined up on both sides of the avenue

Along the seven-meter-wide street, figures dressed as priests they carried boats gilded on sedan chairs, accompanied by dancing vestals and by bearers of light rods

The soundtrack was chosen by classic music vocal, which harmonized well with the rhythm dictated by 160 percussionists and military bands

In addition to the TV cameras, spectacular images were shot by drones who flew over the area of temples

On the Nile they marched boats, theater of ballets and shows

The show was inspired by a annual rite of Ancient Egypt celebrated in Thebes during the New Kingdom and in subsequent periods. The celebration included a ritual procession of the boat which was used to carry statues of deities

The event, which was broadcast not only on Egyptian TV, but also in the United States, the United Kingdom, Germany, Russia, France and South Africa, was aimed at relaunching Luxor, which is a tourist destination and enhance the Egyptian historical heritage