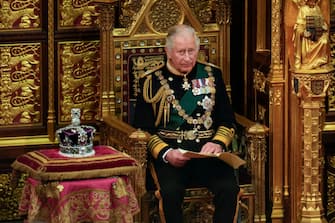 King Charles III at the first session of the English Parliament

When Saturday King Charles III attended the inauguration of the new session of the English Parliament in Westminster to read the Queen’s Speech in place of the late queen, the attention of many immediately focused on majestic crown lying on the bearing that was at his side. This is theImperial State Crownone of the most famous headdresses of Elizabeth II, traditionally worn by the monarch for the annual opening of the Chambers

Queen Elizabeth, the most beautiful crown jewels, from tiaras to necklaces. PHOTO

The Imperial State Crown looks like a sumptuous headdress forged in gold and finely decorated with 2,868 diamonds of different cuts to which several are added colored stones, including 17 sapphires, 11 emeralds and 269 pearls. It weighs approx 910 grams in all for 31.5 centimeters in height and its value is not quantifiable. It represents a symbol of authority and power but also an authentic treasure that contains a precious chapter in the history of the Windsors

Queen Elizabeth, the 20 most original hats worn in 70 years of reign. PHOTO

Kept together with the crown of St. Edward at the Tower of London, the headdress was made for the coronation of King George VI in 1937 but is based on a project for Queen Victoria of 1838. At the opening ceremony of the Parliament of 1845, she fell from the pillow supported by the Duke of Argyll and shattered. After the unfortunate episode, the jewel was put aside and reassembled for George VI in a lighter and easier to wear model. Then it was further remodeled for the coronation of the queen Elizabeth II in 1953

The Imperial State Crown is the headdress that the English monarch wears after the coronation ceremony, before leaving Westminster, in place of the Crown of St. Edward. The latter, considered the true symbol of royal power, in fact, it cannot be worn for long due to its great weight, given above all by the gold with which it is forged and by the numerous gems that are set there. Elizabeth II herself confessed one day that the change was necessary because the Crown of St. Edward had such a size that “break your neck”

Like all treasures of the royal family, the Imperial State Crown is also adorned with several ancient stones, each of which holds its own story halfway between history and legend. In the front section, bordered with ermine hair, it stands out the brilliant 317.4-carat Culligan II, also known as the Second Star of Africa. It is one of the nine diamonds obtained from the largest diamond in the rough never found in history, the Culligan in fact, found at the beginning of the twentieth century in a mine in South Africa and donated as a tribute to the Windsors

The top of the Crown is made up of four crossesembellished with three emeralds. The famous “Ruby of the Black Prince“, a large irregular cabochon ruby ​​that originally had to be a pendant. The stone was in fact pierced and later the hole was covered by a small ruby ​​still visible today. Each cross is alternated with a lily encrusted with diamonds and connected to it by a band supported by sapphires

A suggestive story then surrounds the festoons that unite the crosses to the central globe of the Crown. They are in fact composed of oak leaves from which four of the seven pearls hang Catherine de ‘Medici received from Pope Clement VII at his marriage to Henry II of France in 1533. Later, the queen consort gave them to her daughter-in-law, Mary, sovereign of Scotland, and then they were sold to Elizabeth I. It is unlikely that he wore these as earrings since she preferred to wear them scattered over her hair and ruff.

To complete the jewel, another object with almost mythological origins: the St Edward’s Sapphire. It is thought that the stone was set in the coronation ring of Edward the Confessorwho ascended the throne of England in 1042. Edward, one of the last Anglo-Saxon kings of the country, was buried with the ring in Westminster in 1066. The jewel would have been taken from there in 1163 and then survived the English civil war in the 17th century to then be cut back to its present form for Charles II after the restoration of the monarchy

The imperial crown is now resting on the coffin of Queen Elizabeth. The sovereign is at the moment at Westminster Halthere, where her people will be able to bring herlast farewell. A huge crowd has been stationed in the streets of London for days, from Buckingham Palace onwards, to pay homage to their queen