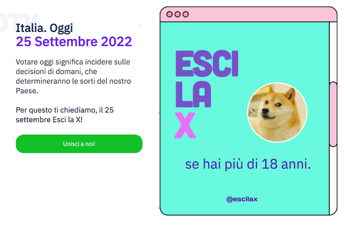 At the start ‘Esci La X’, the awareness campaign to bring young people to the vote on 25 September. This is the initiative just launched by Rinascimento Green, an organization that aims to bring together associations, foundations, and personalities from the world of civil society, to promote issues and projects related to environmental, political and activism sustainability. “In the last elections we saw record abstention, and the current disappointment with politics could drive even more voters away,” says Stephanie Brancaforte, director of Rinascimento Green, recounting the campaign. “We want to remind all voters who have power – through voting – to affect public trials. We want to encourage young people to take full advantage of their rights, because the voice of each of us counts “.


It is a non-partisan campaign, on social media and in our cities: “The vote is like an entrance ticket that says, here we are, we are watching you, we have our contribution to make, we take our future in hand”, he says again. Brancaforte, who is also a blogger and former director of Change.org in Italy, the largest platform in the world for social change with over 9 million users in our country.

The campaign aims to be a stimulus especially for the 18-35 year old target to get information and understand the democratic value of voting. “We will never tell you who to vote for, we do not represent any party and no interest, we will tell you why to vote”, is the slogan. During the development of the campaign, influencers and personalities from the world of culture, music and entertainment will be involved, names that remain confidential for now.