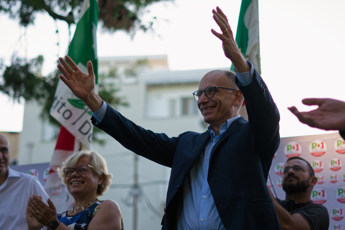 After yesterday’s center-right event, the dem secretary relaunches: “Ours will be the square of Italy that looks to the future”. Spaghetti Band soundtrack and EU leader video messages

Starting at 6 pm, in Piazza del Popolo, the electoral campaign of the democratic and progressive Pd-Italy will end. On stage, before the final speech by the dem secretary, Enrico Letta, local administrators, group leaders, ministers and dem candidates will take part, alternating with representatives of civil society and video messages from European leaders.


“We will tell the fairest of Italy – underlined the secretary Enrico Letta, during his video message this morning addressed to the candidates – we will concentrate on our ideas and on our many proposals. We will clearly tell the Italians that ours is the square of the Italy of hope, which looks to the future, very different from that of the right, of Italy of fear, which yesterday threatened itself for the next 5 years “.

Starting at 5.30 pm, before the speeches, the music of the Spaghetti Band will begin to warm the audience together with an orchestra, which at 6 pm will perform the national anthem. Among the speeches on stage also those of the mayor of Rome, Roberto Gualtieri, the president of the Lazio Region, Nicola Zingaretti, and the vice president of the European Parliament, Pina Picierno. Following the presidents of the Region Michele Emiliano, Vincenzo De Luca, Eugenio Giani and Stefano Bonaccini.

Greetings from some European leaders will also be shown, including Spanish Prime Minister Pedro Sanchez and Hungarian MEP Clara Dobrev, who will talk about the distortions of the Orban model. Finally, before the conclusions of the secretary Enrico Letta, the interventions of the candidates Roberto Speranza and Elly Schlein, in addition to the writer Viola Ardone, are foreseen.