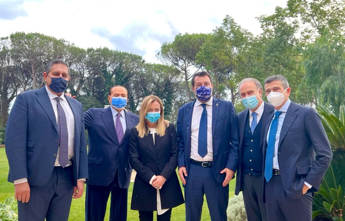 Monday or Tuesday new meeting, centrists aim to raise the odds. Brugnaro: “No more fish in the face”

The issue of the allocation of centrist seats in the center-right should be dissolved on Monday, or at the latest on Tuesday, with a new table of the allies. To complicate the issue today, the two amalgamations just announced that see Maurizio Lupi’s NCI make an electoral pact with Giovanni Toti, leader of Italy in the Center, in agreement on presenting a unitary symbol. The same agreement was signed by Lorenzo Cesa for the UDC and Luigi Brugnaro of ‘Coraggio Italia’.


In the pacts of last week, at the end of a summit meeting, it was planned to assign 11 seats to the centrists, in particular to ‘Coraggio Italia’ and ‘Noi con l’Italia’. Now the novelty of Giovanni Toti’s entry into the coalition and the UDC’s decision to no longer run on the list with Fi, instead aiming for a mini-alliance with ‘Courage Italy’.

In the morning, center-right sources hypothesized that 12-13 seats would be assigned to the centrists, thus including an extra one-nominal share for ‘Italy in the center’. Now the discussion opens also on the quota to be attributed also to the UDC, after the agreement with Coraggio Italia. “We will point our feet – Brugnaro said -. Now that’s enough, you can’t always get fish in the face”.