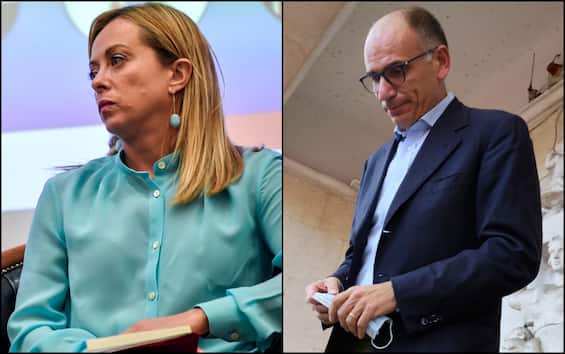 The authority approved by majority vote, with Commissioner Elisa Giomi voting against, a resolution after the reports on the confrontation between Enrico Letta and Giorgia Meloni, scheduled on Rai for 22 September and which provoked protests from excluded political forces. According to the provision, the programming of a single television confrontation between only two political subjects “does not comply with the principles of equal treatment and impartiality of information”

The debate continues on the TV confrontation between political leaders in view of the elections on 25 September (UPDATES – THE SPECIAL – THE VIDEOS). Agcom also intervened on the issue: a single confrontation between two does not respect the level playing field, he decided. The resolution was approved by majority vote, with Commissioner Elisa Giomi voting against. It came after the reports on the confrontation between Enrico Letta and Giorgia Meloni, scheduled in Rai for 22 September, which provoked protests from excluded political forces.

Vespa: “We would not have taken anything away from anyone”

Agcom, with the provision, also reminded all broadcasters to strictly respect the equal treatment of political subjects in the in-depth programs. The confrontation between Letta and Meloni was scheduled during Porta a Porta. “I’m sorry – commented Bruno Vespa after the resolution -. We would not have taken anything away from anyone and done good journalism. We are ready to confront all the leaders, but it is known that there is strong resistance. Patience”. The announcement of the face-to-face had prompted the parties to ask for the intervention of the Supervisory Commission to prevent the airing of the confrontation or to change its modality. The president of the bicameral Alberto Barachini had written to the Authority to ask to verify whether or not the choice of confrontation respected the law and regulations on a level playing field.

Agcom recalled that the electoral law provides for a mixed system (majority and proportional), which allows parties to appear or not in a coalition and therefore does not provide for the identification of a coalition leader, nor does it necessarily postulate that the outcome of the elections is determined by the confrontation between two lists or between two coalitions. According to the Authority, therefore, the programming of a single televised confrontation between only two political subjects “does not comply with the principles of equal treatment and impartiality of information, as it is likely to determine, for the subjects participating in the confrontation, a undue electoral advantage over others “.

Sky also in the field for the comparison between the leaders

Red light, therefore, for the initiative of Bruno Vespa at Porta a Porta: the conductor nevertheless reiterated his desire to host all the leaders. Other broadcasters – starting with Sky TG24, which first asked at the end of July and then reaffirmed its willingness to host a debate between the leaders, up to La7 – have proposed for broader comparisons. However, there is resistance from the political forces.