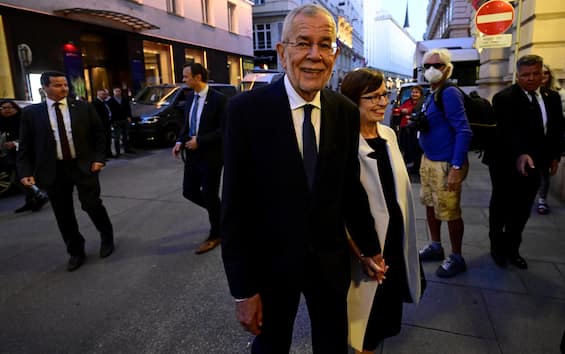 In Austria Alexander Van der Bellen was re-elected president in the first round, with 56.2% of the vote. The 78-year-old professor, a member of the Greens, will therefore remain for another six years at the Hofburg, the former residence of the Habsburgs. As predicted by the polls, he got the better of the other six challengers. The candidate of the ultra-right Fpoe Walter Rosenkranz stopped at 17.9%. Dominik Wlazny of Bierpartei, the beer party, surprisingly finished third.

“The elections are a day of celebration for democracy”, commented a visibly satisfied Van der Bellen after the vote. The president then confessed that he feared that many would not go to the vote, “because Van der Bellen will be re-elected. But every election must be taken seriously, even more so in a climate of great concern”, he added. In the previous elections, those six years ago, Norbert Hofer – Rosenkranz’s party colleague – was in the lead after the first round with 35%, but the 2016 presidential elections were very different. The popular Oevps and the Spoe Social Democrats actually presented their own candidates, while this time they paved the way for Van der Bellen by giving up on doing so. The one that has just ended was in some ways a “non-election campaign”. The incumbent president has in fact declined the invitations for the televised duels, limiting himself to a few electoral appearances in the square: the Austrians – was his message – had six years of time (marked by the pandemic and a series of government crises) to get an idea of ​​Van der Bellen.

Van der Bellen’s result is solid, given that he did not even remotely risk the ballot, but it is far from those of his predecessors who showed up for a second round: Rudolf Krichschlaeger in 1980 and Heinz Fischer in 2010, for example, touched 80% of the votes. It is also true that no other outgoing president has had so many challengers. The presidential elections were seen as a sort of dress rehearsal for the next elections in Austria. Five of the six candidates belong to the right wing, as Rosenkranz also pointed out. “My result – he said – is respectable and beyond all pollsters’ expectations. This is the second result in the history of an Fpoe candidate, despite other candidates having fished in our constituency”. The real surprise was that of Dominik Wlazny of Bierpartei, the beer party. The 35-year-old Viennese, aka Dr. Marco Pogo, is a well-known musician, stand-up comedian, doctor and district councilor in Vienna. With 8.4% of the votes he finished on the lowest step of the podium (in the municipality of Vienna Dr. Marco Pogo is even second). Born as a provocative formation, the Bierpartei could be destined to gather the young and not right-wing protest electorate. Tassilo Wallentin could then have a political future, albeit not at the Hofburg. The Viennese lawyer, an independent candidate, was able to count on the support of the powerful tabloid Kronen Zeitung. With 8.3% in the next electoral rounds it could intercept a conservative electorate who for one reason or another does not want to put the cross on the popular Oevp or on the ultra-right Fpoe. The same goes for the no vax Mfg party: even if their candidate Michael Brunner stopped at 2.2%, the movement is now a permanent presence on the ballot papers.