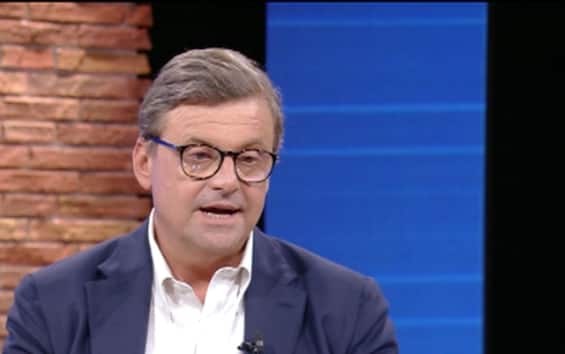 After the agreement with Pd e + Europa, the leader of Action talks about the current political situation, the alliances in the center-left and the electoral campaign in progress. “The coalition pact is to continue Draghi’s agenda,” he said

Following the agreement between the Democratic Party, Action and + Europe, Carlo Calenda spoke to the microphones of Sky TG24: “Without the agreement in the center-left, the center-right would have already won”. The Action leader talks about the current political situation, the alliance and the future electoral campaign. And he adds: “The coalition pact is to continue Draghi’s agenda” (THE FULL TEXT OF THE UNDERSTANDING-THE REACTIONS-THE POLLS).

The agreement with the Democratic Party

“For us it was a painful, complicated choice – Calenda said about the agreement with the Democratic Party – it is clear that for me it was easier to go for absolute purity, without anyone, however that choice would have determined the victory of the right at the table. In other words, the people who had sent Draghi home would have won without any possibility of contention ”. The leader of Action explained that he had asked Enrico Letta for very specific things: “First, not one of our votes must go to people like Di Maio or Fratoianni; second, we want to write down points of the program which are: no taxes, waste-to-energy plants, serious budget policy, regasification plants. All those things that are essential to us. The third fundamental point is that this coalition will have two leaders: one Enrico Letta for the left-wing area and one is me for the liberal area ”. And he added: “Enrico Letta has signed the program. If Fratoianni is not there, please clarify before he forms the coalition. My interlocutor is Enrico Letta”.

The coalition and the Draghi agenda

When asked how to hold together forces that oppose the Draghi agenda, as desired by the Pd-Action agreement, Calenda replied that it is a question to ask Letta. “He signed the program. He is a moderate person who shares the Draghi agenda totally. The pact is the continuation of the Draghi agenda,” said the Action leader, pointing out that there is much more contradiction on the right. With regard to the prime minister, however, Calenda explains that since there are many differences between the parties that make up the coalition, “we have decided that we will decide together, but there is no specific criterion. The hope that he can remain Mario Draghi, I believe, unites both me and Read “. “I think we are crazy – he added – in a moment of total crisis in the world, inflation, we have sent away not only the most prestigious Italian, but as can be seen from the data, he has spent 48 billion to alleviate the effects of inflation. You can always want more, but there are some crazy things on the other side. “

“To the right total irresponsibility”

Speaking of center-right parties, Calenda believes there is “total irresponsibility on the budget”. “There is the proximity of Putin-Orban, there is the idea that Italy must leave the great European countries, there is a choice of a path that radically changes the international positioning”, she said. Precisely to avoid this drift, it was necessary, according to the Action leader, an agreement with very precise stakes in the center-left. Returning to the distrust of Draghi and the work done by the last executive, the leader of Action underlined what, in his opinion, are incorrect information disseminated by the center-right: “Today Berlusconi said that he obtained the PNRR, but not Berlusconi existed on the PNRR negotiation, there never was. He said we will plant a million trees, we will increase all pensions we are at a level that makes a bit of an impression “.

“Giorgia Meloni is not ready to be premier”

With regard to the polls that give the Brothers of Italy as the first party and therefore Giorgia Meloni as a possible Prime Minister, Calenda believes that the leader of FdI is not “ready to govern”. “Not just because she has never ruled anything except a portfolioless ministry for a short time. Beyond the extreme positions that Meloni has, she has never managed anything ”, underlined the leader of Action underlining. “It is a problem of international policy and program, because a program that says ‘I spend 80 million’ but does not tell you where, is a joke. It is not fascism but chaos and chaos leads to Venezuela ”.