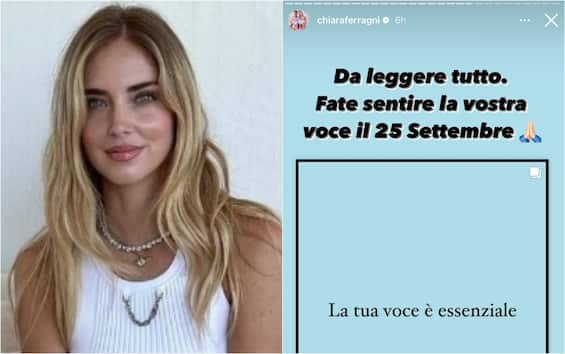 “Make your voice heard on September 25”. This is the call to vote launched by Chiara Ferragni in her Instagram stories in view of the political elections. An appeal that does not hide the entrepreneur’s ideas and accompanies the sharing of a post on the page “open the brain”, which in her bio defines itself as an “anti-fascist, anti-racist and LGBT + supporter” group.

Chiara Ferragni had already entered the electoral campaign in recent weeks and had criticized the Brothers of Italy by sharing an image of the account of the information site The Vision in which we read: “FdI has made it practically impossible to have an abortion in the Marche region that it governs. A policy that risks becoming national if the right wins the elections ”. Now the entrepreneur shares the post of “open the brain” which invites us to “fight apathy” and, among other things, writes: “The elections of September 25 will be a carnage, they will represent the birth (according to all current forecasts) of the government furthest to the right (at the level of ideological extremism) throughout the history of the Italian Republic ”. Then he talks about “LGBT + people who will see the hopes of being protected by this state disappear for the next 5 years”, about the climate of hatred “that will be created by the very bright and brutal tones on the immigration issue”, end of life and the rights of women. The post then goes on to talk about the apathy “of millions of Italians, who will not contribute directly with their vote to make this happen, but who will not do anything to prevent it either. The apathy and indifference of those who stand still to see that their neighbors, their daughters or her friends are deprived of or denied rights scares me ”.