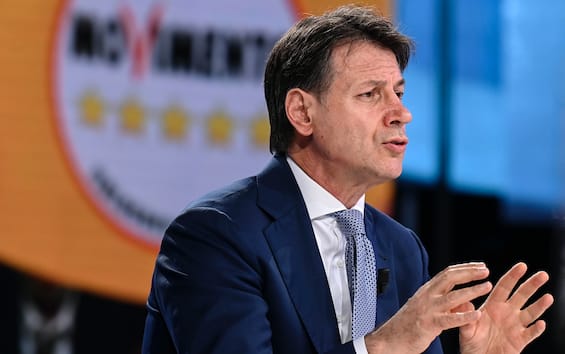 Thus the leader of the M5s expressed himself about a possible rapprochement with the Democratic Party. “There are absolutely no conditions today to do a ballet. We are serious people, ”he said. He then annoys the response to Virginia Raggi that she had said she was “perfectly candidate” in the next political elections, despite the limit of the two terms. “You are not eligible,” Conte reiterated

“At the moment I do not see a prospect of an alliance after the vote with the Democratic Party,” I see a prospect of an M5s that urges citizens, even those who abstained to go and vote. We will carry out our goals tooth and nail ”. These are the words of the pentastellato leader, Giuseppe Conte, who spoke at “Controcorrente”, broadcast on Rete4. “A rapprochement with the Democratic Party? There are absolutely no conditions today to do a ballet. We are serious people, ”he stressed. Cricket? “With him we will certainly organize something together” during the election campaign, he explained. “This is a new phase in which, however, Grillo remains absolutely indispensable”.

The battle between Count and Raggi

Meanwhile, there is a clash in the party between Virginia Raggi and Giuseppe Conte. The former mayor of Rome is a river in flood and she asked for transparency on the lists, arguing that she would be “perfectly eligible” in the next political elections, despite the limit of two terms. Not only that, because the pentastellata, which sits on the guarantee committee, attacked the choices made by the leader of the Movement, specifically proposing a possible new alliance between the M5s and “traditional parties”. Conte’s reply to “Controcorrente” is dry: “I did not understand on what basis Raggi gives the interpretation that you are a candidate. In reality we have said that the double mandate is valid for everyone and you, considering the zero mandate, are still holding a third mandate ”. For this reason, you continued the leader of the Movement, “I believe that there are absolutely no conditions” for your candidacy in Parliament. “Virginia Raggi is not a candidate”, he reiterated “and I say this because this has created, compared to the others in the same conditions, an absolutely false perspective”.

The words about Di Battista and Di Maio

Conte also focused his speech on Di Battista. “If the M5s arrived here it is also thanks to Alessandro’s commitment and great generosity,” he said. “His words about Grillo father master? They were ungenerous ”, he specified. And, speaking of the lack of candidacy with the M5s, he explained: “I was expecting it because we talked to each other a few times in recent days, we talked about the political line of the Movement and we registered some differences. Perhaps this is the main reason that led to this decision by Alessandro ”. It is, he concluded, “a person who has played an important role in the history of the Movement, he said something that I really like: I still want to do politics and create an association. I am convinced that politics is everywhere ”. A passage, then, also on Di Maio. “What effect does seeing Di Maio’s photo in the headquarters of the Democratic Party have on you? “He has a somewhat furtive look … It makes me feel a little, but I don’t want to talk about him. I said what I thought, let him have the opportunity to pursue his political ambitions”.

“Renzi-Calenda? I am reminded of ‘An armchair for two'”

“Renzi-Calenda? I am reminded of the film ‘An armchair for two’: let’s see how long it will last and if they will manage to get along at least in the electoral campaign ”. These, however, are the words of Conte about the agreement between IV and Action. “There are videos in which, a few days ago, Calenda declared that he was horrified to engage in politics with those who tried to sponsor the Saudi Renaissance, but today we see them alongside”, attacked the pentastellato leader.

“The M5s can be a surprise”

“Even in 2018 such a sensational result was not in sight: the M5S can be a surprise. If citizens do not distinguish between the various political offers, they will leave nothing to change in Italy. They have to look us in the face and on the basis of credibility they have to choose ”, concluded Conte.