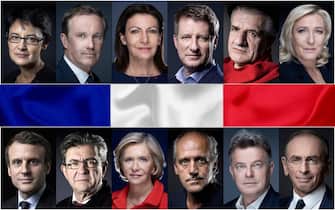 Twelve candidates – eight men and four women – are competing in France for the presidency of the Republic. The first round of the elections is Sunday 10 April. If no one gets an absolute majority, the ballot between the two names with the highest number of votes will be on April 24th. Starting with outgoing president Emmanuel Macron and continuing in alphabetical order, here are the politicians in the running for the Elysée

WATCH THE VIDEO: Eliseo 2022, Macron’s rally for the presidential elections

The outgoing president is in the running Emmanuel Macron, with his centrist party La République en marche (founded by himself in 2016). Macron, 44, was elected to the Elysée in 2017 in the second round, obtaining 66.1% of the votes and beating Marine Le Pen

France, the special on the elections

Among the four women candidates for the Elysée there is Nathalie Arthaud, 52, representative of the far-left Lutte Ouvrière party. Economics teacher, in the 2012 and 2017 elections he obtained 0.56% and 0.64%

Presidential elections France, from candidates to polls: everything you need to know

Then there is Nicolas Dupont-Aignan, 61, candidate of the far-right party Debout la France. Eurosceptic, he too has already been a candidate for the Elysée: in 2012 he obtained 1.79% of the votes, in 2017 4.7%

All news from France

The mayor of Paris also runs for the Elysée Anne Hidalgo: 62 years old, xx labor inspector and daughter of Spanish immigrants, is the candidate of the Socialist Party. This is the first time you are running for the presidential elections

The candidate of the Greens is Yannick Jadot, 54 years old. Former Greenpeace activist and MEP, at first he decided to run again in 2017, but then he gave up to support the socialist Benoît Hamon

Among the candidates there is also Jean Lassalle, 66, agricultural technician: runs for the Résistons party. In the 2017 elections he came in seventh place, obtaining 1.21% of the votes

After losing the ballot against Macron in 2017, he tries again Marine Le Pen. The candidate of the Rassemblement National, a far-right party, is 53 years old and the daughter of the founder of the Front National. She too ran in 2012, when she came in third with 17.9% of the vote

The candidate of La France insoumise, a radical left party he founded himself, is the 70-year-old Jean-Luc Mélenchon. Former senator and socialist minister, in 2012 he obtained 11.1% of the votes, in 2017 19.6%

The right-wing party Les Républicains has chosen Valérie Pécresse, 54 years old. She is a former minister and advisor to Jacques Chirac, she is the current governor of the Ile-de-France region. She has never raced for the Elysée before

Also running Philippe Poutou, 55, exponent of the extreme leftist Nouveau anticapitalist parties. Before devoting himself full time to politics, he was a worker and trade unionist. In the 2012 presidential elections he obtained 1.15% of the votes and in 2017 1.09%

The French Communist Party ranks Fabien Roussel, 52 years old. Before turning to politics, he was a television journalist. It is in its first presidential race

He is also a journalist (and essayist) Eric Zemmour, 63-year-old candidate of the far-right party he himself founded Reconquêt. It is the first time that he has participated in an election, having entered politics last September