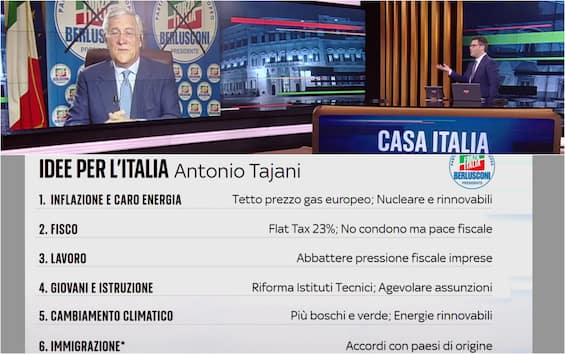 The Forza Italia coordinator was a guest of Casa Italia, broadcast from Monday to Friday from 20.30. In the final part of the program, the leaders talk about their proposals and their recipes regarding six themes: from expensive energy to immigration

Antonio Tajani, coordinator of Forza Italia, was a guest of Casa Italia, the new appointment of Sky TG24 – broadcast from Monday to Friday from 20.30 – hosted by Fabio Vitale and dedicated to the elections on 25 September. In the final part of the program, the leaders tell about their proposals and their recipes regarding different themes. There is one minute available to answer any question on each topic. In six months we will see if whoever won the elections will have kept their promises. Here are Tajani’s answers (SKY TG24 SPECIAL: TOWARDS THE VOTE – ALL VIDEOS – LIVE NEWS).

On the energy crisis, Tajani explains: “We need immediate action”, with the “defense of the purchasing power of wages and pensions and action at European level to maintain a ceiling on the price of gas”. Then we need a new energy plan at the national level “which focuses on the latest generation of nuclear power, on renewables and which allows for an increase in national gas extraction”. According to the FI coordinator, it is also necessary “to increase the import of gas from different countries other than Russia. For example, the TAP must be used much more than has been done up to now”.

On the tax issue, FI’s recipe aims to introduce the flat tax, “everyone has to pay 23%”, explains Tajani. You can start step by step, he continues, underlining that “then we need to arrive at a real fiscal peace” which ” facilitates those who pay immediately ”, this“ is the way to get money into the state’s coffers ”.

According to Tajani, Italy “must have a real industrial and agricultural policy”, “the real economy must be supported”. One employee pays 1500 euros in salary about 3000 “. FI is not for the minimum wage required by law,” instead we believe in collective bargaining that sets minimum wages “.

“Young people must be supported from a formative point of view”, explains Tajani, “so not only focus on traditional studies – classical and scientific high schools that are used to enter the university -” but also “on professional training”, with a “enhancement experts in the various sectors “, in order to have” young people who, once the training phase is over, can go immediately to work. I am thinking of the current system that exists in Germany and Austria “.

On the environment, the coordinator of FI explains that one of the points on which to insist is the increase of “realizations of woods around cities”. Furthermore, “we must focus on renewable energies and on nuclear power which pollutes less”.

Finally, on immigration, Tajani specifies: “We must work above all in Africa, that is, invest at European level with a real Marshall plan to ensure that Africa grows” and “make agreements with the countries from which migrants depart”. He also needs “a vision of Italy for the next 20 and 30 years: that it focuses on economic growth, without leaving anyone behind and all this can be done by reducing the tax burden”.