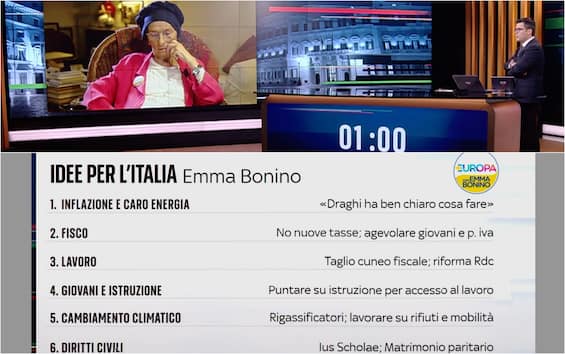 The senator of + Europe was the second guest of Casa Italia, broadcast from Monday to Friday from 20.30. In the final part of the program, the leaders talk about their proposals and their recipes regarding six themes: from expensive energy to civil rights

Emma Bonino, senator of + Europe, was the second guest of Casa Italia, the new appointment of Sky TG24 – broadcast from Monday to Friday from 20.30 – hosted by Fabio Vitale and dedicated to the elections on 25 September. In the final part of the program, the leaders tell about their proposals and their recipes regarding different themes. There is one minute available to answer any question on each topic. In six months we will see if whoever won the elections will have kept their promises. Here are Emma Bonino’s answers (SKY TG24 SPECIAL: TOWARDS THE VOTE – ALL VIDEOS – ALL NEWS LIVE).

On energy and inflation, Bonino explains the position of his party: “It is written in our sober program”. “I think inflation is a dramatic fact, which must be governed. Now, I don’t have all the data available to make a proposal myself, but I think the president has it very clear.”

On the tax side, Bonino instead explains: “No more new taxes, no assets and no penalties for the different categories. Our ‘ball’ is that of young people and VAT and reductions for the under 35. We are fighting to reduce a ‘ injustice that is called ‘VAT advance’, that is, the contribution that freelancers must pay regardless of what they earn “. On this the aim is to “a reduction of 70%”.

On the labor front, Bonino explains: “The company produces work and not the State. The State would already do a lot to set the rules and control them. We need to reform the Citizenship Income and I think that the tax wedge must be cut to make the ‘Italy is an attractive country both for businesses and for those who want to invest “. For the sentarice, moreover, he needs “to introduce more active policies to allow those who receive that income support to find a job, so other than navigators, those have been a total failure”. + Europe agrees to a minimum wage, but “that must be done according to the productive sectors”.

While on education, Bonino states: “It is clear that young people are the generation already present and active in our country, with a whole series of problems”, but “it is clear that more education – even in scientific subjects, for example – has more aptitude for access to work “.

On the climate, Bonino then specifies that, as a governing force, + Europe is willing to maintain the proposal on regasifiers. “For example, if I look at my college, there is the problem of waste and the problem of mobility that go hand in hand with the climate issue, on which we – who largely violate the European directives – pay about 780 million a year. for illegal landfills, waste water etc. And I believe that this needs to be put in order “.

On the issue of civil rights, chosen by Bonino herself as the last focus, the senator finally explains: “They are social rights, because the rights denied in Italy, those who have the money resolve them abroad, those who do not have them organize themselves as best they can. I’m talking about the ius scholaetherefore also of immigrants and citizenship, I speak of the legalization of cannabis, I also speak of the integration of immigrants themselves who can produce income “. All this” is in the second row if not third “, but” for us it remains a priority commitment that we will carry on “.