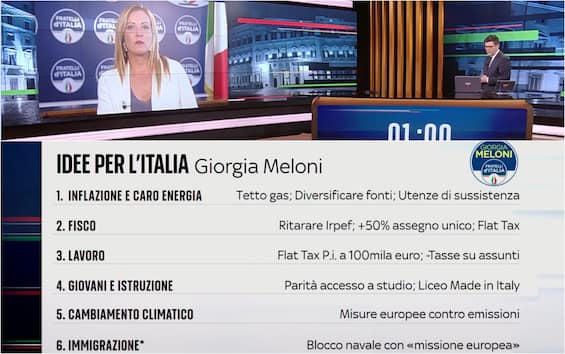 The leader of Fratelli d’Italia was a guest of Casa Italia, broadcast from Monday to Friday from 20.30. In the final part of the program, the politicians tell about their proposals and their recipes regarding six themes: inflation and expensive energy, taxation, work, young people and education, a topic at will (Meloni has chosen immigration). In six months we will see if whoever won the elections will have kept their promises

The president of Fratelli d’Italia, Giorgia Meloni, was a guest of Casa Italia, the Sky TG24 appointment dedicated to the elections of 25 September – broadcast from Monday to Friday from 20.30 – and hosted by Fabio Vitale. In the final part of the program, the leaders talk about their proposals and their recipes regarding six themes: inflation and expensive energy, taxation, work, young people and education, climate change, a topic of their choice (Meloni has chosen immigration). One minute for each theme. In six months we will see if whoever won the elections will have kept their promises. Here are Giorgia Meloni’s answers (TOWARDS THE VOTE: SKY TG24 SPECIAL – ALL THE NEWS ON THE ELECTIONS LIVE – ALL THE VIDEOS).

On the subject, Meloni proposes “in the immediate future, to calm the bills, support the position of a ceiling on the price of gas at the European level, but also, if this is not done in Europe, at the national level separate the cost of gas from that of power. Then we need to work on the Italian energy supply, with an energy mix, that is, diversify the sources and countries from which we import “. The leader of FdI says that “we have a great opportunity for Southern Italy because it will be the outlet for the Mediterranean gas pipelines and for its climatic conditions it is one of the places where we can best work on renewables. We can be the European energy hub. Finally, we propose subsistence utilities for needy families “.

“We work mainly on the issue of families”, says Meloni. “The objective of the legislature is that we must progressively arrive at a taxation on Irpef that is calibrated on the number of family members, the famous ‘family quotient’. In the immediate future, we want to increase the single allowance for each child by 50%, a good measure that today has inadequate resources. For companies, our proposal is that of an incremental flat tax, that is a flat tax of 15% on everything you earn more than the previous year ”.

“We want to bring the flat tax for VAT and self-employed which at the moment is for a turnover of up to 65 thousand euros to 100 thousand euros”, suggests Giorgia Meloni. “We are also for a taxation for companies that says: ‘the more you hire, the less you pay’. The higher the amount of employees you have in relation to your turnover, the less taxes you owe to the state. We have to incentivize to hire. In the immediate future, we imagine a super deduction of labor costs for those who hire more than the maximum peak of the previous three years of 120% for each worker, which reaches 150% for fragile workers. The tax wedge costs 16 billion and is a medium-term measure. In the short term, however, we are for a flat tax of 5% on overtime and production bonuses ”.

“We need to invest in schools starting from the right to education theme,” said the leader of FdI. “Scholarships also for sporting merits must be implemented and an extraordinary plan must be made on this in order not to penalize those born in more difficult territories or families. I believe that the bulk of the study should take place in the classroom and not at home with homework. We need to increase the relationship between school and the world of work, we are for a high school of Made in Italy. We need to de-tax young people for new activities up to the age of 30 and we need to restore the conditions for the loan for the first home for young people who have a precarious job ”.

“I’m for a positive approach,” explains Meloni. “We need to work on technological innovation, for example to support precision agriculture, work on environmental training even in schools, on soil protection. I disagree that we alone in Europe can solve the global emissions problem. Especially if we then import duty-free from nations that are responsible for much of that pollution. The measures must be European and global. The EU should put tariffs on products that come from nations that do not respect our own environmental standards ”.

“The Brothers of Italy proposal is historically defined – and we define it – ‘naval blockade'”, explains Giorgia Meloni. “With this naval blockade we do not mean an act of war as our detractors say, but we mean, trivially, a European mission with which to negotiate together with the Libyan authorities to stop the departures together on the African coasts, to open hotspots managed by the community in Africa. international, assess in Africa who is entitled to be a refugee, distribute it equally in the 27 countries of the European Union and send back those who do not have the right to be refugees. Immigration is not done by having the smugglers make the entry selection, it is done with a document called the ‘flow decree’ with which the States decide how much immigration they can include and from where to give those people a dignified life. While we have landed in Italy hundreds of thousands of immigrants who we then left to sell drugs or prostitute themselves in too many cases ”.