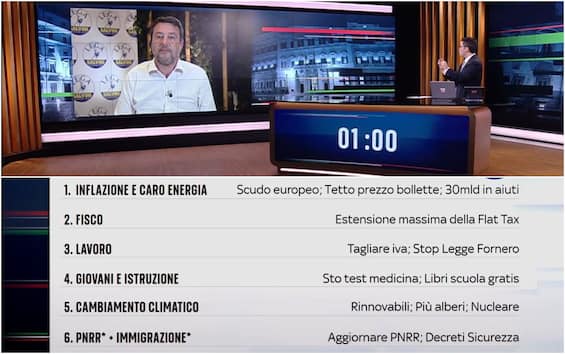 The leader of the League was a guest of Casa Italia, broadcast from Monday to Friday from 20.30. In the final part of the program, the politicians tell about their proposals and their recipes regarding six themes: inflation and expensive energy, taxation, work, young people and education, a topic at will (Salvini has chosen PNRR and immigration). In six months we will see if whoever won the elections will have kept their promises. Here are Salvini’s answers

Matteo Salvini, secretary of the League, was a guest of Casa Italia, the Sky TG24 event – broadcast from Monday to Friday from 20.30 – hosted by Fabio Vitale and dedicated to the elections on 25 September. In the final part of the program, the leaders talk about their proposals and their recipes regarding six themes: inflation and expensive energy, taxation, work, young people and education, climate change, a topic of their choice (Salvini has chosen Pnrr and immigration ). One minute for each theme. In six months we will see if whoever won the elections will have kept their promises. Here are Matteo Salvini’s answers (TOWARDS THE VOTE: THE SKY TG24 SPECIAL – ALL THE NEWS ON THE ELECTIONS LIVE – ALL THE VIDEOS).

“The European shield. Europe imposes sanctions to stop a war, and we are there and we have voted for them, as long as these sanctions do not hurt Italians, entrepreneurs, traders, truck drivers, workers. So a European shield, as in Covid, which protects and puts a ceiling, a maximum price, on increases in electricity and gas bills. If Europe does not do it, and I hope it does, the first act of the new government would be to put 30 billion – as France has put 40 and Germany has put 60 – to guarantee work, health and dignity to the people. Italian workers “.

“First of all, something that costs zero is to block the sending of the tax bills of the Revenue Agency: right now they risk being a catastrophe for 15 million Italians. Second, to extend the Flat tax, the single tax, the flat tax, simple of 15%, which while we are on the air on Sky helps 2 million VAT numbers: you invoice up to 65 thousand euros, you give me only 15%. And thanks to this simple tax last year they opened 250 thousand new VAT numbers, despite Covid. The goal over the 5 years is to extend this preferential treatment to employees, pensioners and families up to 70,000 euros gross of income in the event of two salaries or two pensions. Yes, the state makes money because the more people work, the more people shop, the more people pay taxes ”.

“First of all, immediately cancel the VAT on basic necessities: bread, milk, pasta, fruit and vegetables. Because those who dine on caviar and champagne can easily pay VAT, those who can’t – perhaps because they are precarious – must be helped in the shopping cart. Then block the Fornero law, which means leaving about 800 thousand male and female workers over the next few months the possibility of choosing a pension after 41 years of contributions paid and opens these huge work spaces to twenty and thirty-year-olds with a solid job, safe and not precarious for life. The tax cut with the Flat tax is the only way to open new workspaces: block Fornero and extend the tax by 15% “.

“There are no doctors, no nurses, the League’s proposal is to remove the limited number in Medicine, as in France. You don’t make the selection with cross-check quizzes, but you do it based on grades, merit, skills after the first year. Second reflection: extend free textbooks from elementary schools at least to middle schools, which are compulsory schools. We would like to strengthen the technical and professional institutes. And if a 16-year-old boy wants to go to work, he must be free to choose what to do with his life “.

“Accelerate on renewables. The bureaucracy is blocking solar panels, photovoltaics, wind turbines. Then apply the PNRR plan which provides for 6 million and 600 thousand trees to be planted in the 14 metropolitan areas from Milan to Rome to Catania. And then nuclear power, the latest generation of clean and safe nuclear power: zero emissions, almost zero waste, is the greenest, most environmentally friendly, most modern and least expensive form of energy. Those who choose the League choose the future and choose nuclear power ”.

Last topic to be chosen: Pnrr (and immigration)

“The Pnrr must be updated, because the projects that cost 10 before the increase in the cost of electricity and gas, if they now cost 20, do not need a genius to understand that something needs to be changed. On the issue of immigration and security, the first council of ministers – if the League wins – the security decrees are reintroduced. It costs zero. Those who arrive in Italy and are allowed to get there are my brother and sister, but the thousands of landings we are witnessing – no longer only in Lampedusa, but arriving from the Friulian borders, from Ventimiglia, on a sailing boat to Calabria and in Puglia – no, we have to go back to being serious. The Italian borders are European borders, so controlling who enters and who leaves is not a right, but a duty. And therefore as Prime Minister I will have the honor of returning to protect the borders, dignity, rules and safety of my fellow citizens ”.