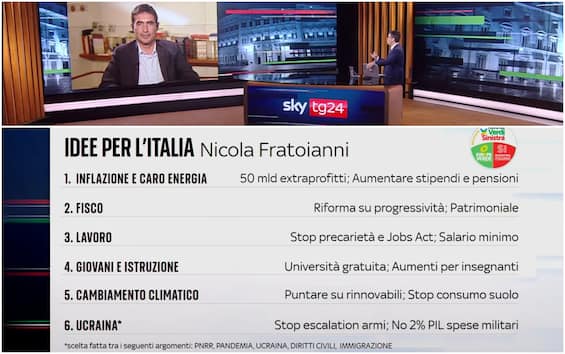 The secretary of the Italian Left was a guest of Casa Italia, broadcast from Monday to Friday from 20.30. In the final part of the program, the leaders tell their proposals and recipes regarding six themes: inflation and expensive energy, taxation, work, young people and education, a topic of their choice (Fratoianni has chosen the war in Ukraine). In six months we will see if whoever won the elections will have kept their promises

The secretary of the Italian Left, Nicola Fratoianni, was a guest of Casa Italia, the Sky TG24 appointment dedicated to the elections of 25 September – broadcast from Monday to Friday from 20.30 – and hosted by Fabio Vitale. At the end of the program, the leaders explain what their proposals and ideas are on six topics: inflation and expensive energy, taxation, work, youth and education, climate change, any subject. One minute for each theme. In six months, we will see if those who won the elections have kept their promises. Here are Nicola Fratoianni’s answers (SKY TG24 SPECIAL: TOWARDS THE VOTE – ALL THE NEWS ON THE ELECTIONS LIVE – ALL THE VIDEOS).

“There are two things to do immediately, the first is to use the 50 billion extra profits that are there, which are stolen from families and businesses and give them back to cushion the impact of inflation. It is the first thing, an emergency measure, but this is what we need in the face of a real emergency. Inflation, on the other hand, must be faced in perspective: ours is a country, the only one in Europe, in which over the last 30 years salaries have a minus sign in front, they have gone backwards. So if the cost of living, bills, rents, basic necessities increase, we need to rebuild a mechanism that links salaries and pensions to the cost of living. It is necessary to establish that if everything increases, only salaries and pensions cannot remain fixed ”.

“The tax authorities must be reformed in the name of progressiveness. In recent decades, something as simple as it is unacceptable has happened in Italy: progressiveness has been compressed by going backwards. We had many income tax bands, many brackets that allowed us to do what the Constitution requires, ask little from those who have little, nothing from those who have nothing and those who have a little more or a lot, a little more or a lot. In recent years, exactly the opposite has happened. We need a reform in the direction of the German tax model, which allows to evaluate the income of citizens and gradually increase the rate. Then we need a reform of the taxation of assets that allows to cancel the Imu on the second home, the stamp duty – which are assets but are unfair because they are not progressive – and to intervene on the very great wealth. If you have more than 10, 15, 50 million euros, maybe you can also give a little something in the general interest ”.

“There are three priorities. Action must be taken to erase the precariousness, which in Italy has become a plague that affects especially the youngest. They live a discontinuous job, without certainties, they cannot have a mortgage, they have no security, they no longer even have a future. There are over 40 contract types. We must cancel the Jobs Act, an unfortunate law, and do as in Spain: the permanent contract as the main form of entry into the world of work. Then a legal minimum wage, we have a proposal, 10 euros gross per hour, because under this figure it is not work but exploitation. Third, I think that the time has come to introduce a rule to make the conditions of workers equal in both the contracting authority and the contractor because there, in the procurement system, a large part of the exploitation and poor labor of the our country. Last, an intervention on the tax wedge on the side of work to return an extra month to those who today lose their purchasing power.

“The school world needs to be strengthened. The school must be returned to its function, it is the most important civil and cultural infrastructure in every country. Meanwhile, access to education from kindergarten to university should be free, at the expense of general taxation, here too paid in a different way: those who have a lot will contribute more, those who have nothing do not contribute in any way but contribute the same. because when it accesses education it becomes above all an element capable of increasing not only the civil and cultural quality of our country, but also its competitive capacity on a global scale. By now the history of crises teaches us that a country is competitive if it invests in research, innovation, the ability to look and cross the future “.

“We have advanced and proposed a plan that allows our country to reach the realistic goal of producing 80% of the electricity it needs through renewable sources by 2030. It is not a question that can be postponed any longer, the fossil is the past, not for ideological reasons, because the climate crisis reminds us of it by throwing it in our face every day. We are in a permanent August for 3-4 months, the drought has become a plague that also in this case is discharged in an unequal way on those who work the land, on the citizens, on those who live in conditions of greatest difficulty. Then stop at land consumption in a country that has one of the highest land consumption ever on a European scale. Third, to intervene on the transport system, reorganize it in the name of collective public transport and the reduction of its costs.

“At this moment a decisive effort is needed for peace, for the diplomatic solution of the war, for the end of the escalation of arms in the relationship with the dramatic Ukrainian affair, but also in the relationship with the priorities of our national spending. I believe that there are few citizens who think that today, faced with the enormous problems we are going through, it is reasonable to imagine that the priority of increasing our military spending to 2% of GDP is almost 13 billion euros. more every year. I believe that an intervention for peace, for demilitarization and to use the resources that would derive from the solution of these problems in completely different directions would be right, necessary and above all very widely shared by our citizens and by our towns ”.