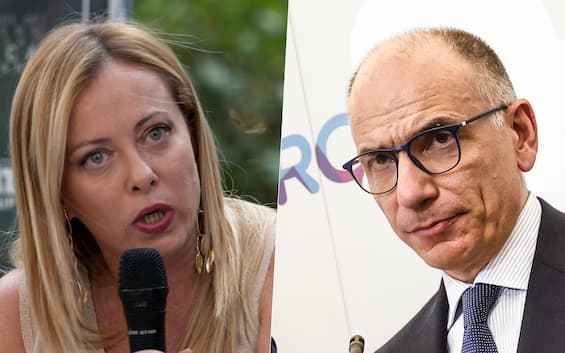 The dem secretary accused the leader of the Brothers of Italy: “She is trying to change her image, but it seems to me a very delicate position, if the points of reference are Orban”. She replies: “We do not accept lessons from those who set themselves up as champions of Atlanticism, but then make pacts with the radical left nostalgic of the USSR”

The clash between the center-left and the center-right is ignited, in view of the political elections on 25 September. The clash was opened by the secretary of the Democratic Party, Enrico Letta, who attacked the leader of the Brothers of Italy Giorgia Meloni: “She is trying to change her image, to powder herself, but it seems to me a very delicate position, if the reference points I’m Orban, ”the former premier said. In the afternoon, Meloni’s reply arrived: “Dear Letta, net of the misogyny that this sentence betrays and the idea that a woman should only be careful about make-up and handbags, your problem is that I don’t need to powder myself ‘to be credible ”(TOWARDS THE VOTE, LIVE UPDATES – THE SKY TG24 SPECIAL).

Letta: “Meloni is trying to change its image”

In the morning Letta, during a press conference, attacked the leader of the Brothers of Italy: “It is a way to redo the image but there is a difference with the speech in Spain for the candidate of Vox, it was another story. I would suggest that you do not make a speech for the Spanish public and one in Italy, each of us has only one face “. Then she increased the dose: “The idea of ​​Italy of the right is not ours and it is dangerous for our country, which is the heart of Europe and we intend to ensure that Italy remains the heart of Europe “.

Meloni: “I am consistent, no lessons from the Democratic Party”

In the afternoon, Giorgia Meloni’s reply arrived, entrusted to a post on Facebook: “The secretary of the Democratic Party, Enrico Letta attacks the positioning in foreign policy of the Brothers of Italy and says that ‘Giorgia Meloni is trying to powder herself’. Brothers of Italy’s position in foreign policy is coherent and extremely clear. And its polar star is the defense of the Italian national interest “. Then he adds: “And we do not accept lessons from those who set themselves up as champions of Atlanticism, but then make pacts with the nostalgic radical left of the USSR. We do not need powder, while you would not be able to cover your contradictions even with the stucco”.