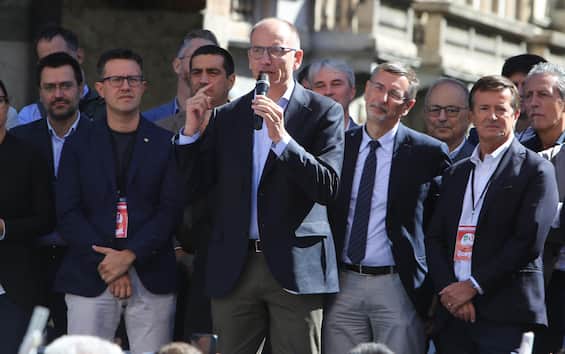 The secretary of the Democratic Party at the “Municipalities for Italy” event in Monza talks about the flood in the Marche: “The environment is not a series B theme. Attention to the territories must be much greater”. Then he criticizes the hypothesis of a renegotiation of the PNRR and on the energy crisis he says: “The price of gas must be capped, we want Italy to make this choice before the whole of Europe”. And he attacks Salvini on the tax authorities: “‘Tax peace’ is the expression he uses to propose amnesties”

“There is no destiny that is already written if we want this destiny to change, and we want it”. Thus the secretary of the Democratic Party Enrico Letta talks about the elections of next September 25, from the stage of the electoral event “The Municipalities for Italy” promoted by the party in Monza. “It is up to us to change the destiny of our country and let me say it – he adds – to all those who tell me if I regret being back in politics I say no, because I was very lucky and politics gave me only positive experiences. Politics makes you only have positive experiences thanks to our community. ” Then he says: “We are the only truly great national party. Italy will not emerge from this crisis with a clash between the party of the North and the South against each other. Italy needs a great national party, the Democratic Party. is the only one that governs all of Italy, from Monza to Catanzaro, which is able to offer solutions to both the South and the North with national policies. “And he sends a direct message to the Lega rally in Pontida:” right now they are going to Pontida: look at that Italy where the whole party of the North is against the party of the South, this Italy will not go anywhere “(FIND YOUR PARTY: THE SKY TG24 QUIZ – THE ELECTORAL PROGRAMS COMPARISON – THE SPECIAL OF SKY TG24: TOWARDS THE VOTE – ALL THE VIDEOS – CASA ITALIA: INTERVIEWS WITH THE POLITICAL LEADERS – NUMBERS – THE CHALLENGE TO VOTING – LIVE NEWS).

“The environment is not a series B theme”

Speaking then of the flood in the Marche, Letta says: “The attention to the territories must be much greater. At this moment for us territories it means above all the disaster of the Marche, with the flood and the hydrogeological instability. This is why we want the Pnrr money is used well and for us it means passing through the territories and using them quickly, well and without any discussion on renegotiations “. For Letta, “the topic with which we began the electoral campaign, the environment, can no longer be considered second-class, it is a fundamental issue, starting with sustainable mobility that has brought us with difficulty around the territories because there must be a future in which emissions and pollution are reduced and territories are protected “. And he adds: “The electoral campaign has turned in recent days, it has seen the situation completely reopen in many territories” but “for us, above all it has changed from the point of view of issues”. On the stage of the event, Letta embraced the mayor of Ancona, Valeria Mancinelli, bringing solidarity to the victims caused by bad weather: “We must work to ensure that what has happened in the Marches in recent days never happens again, and that it never happens again. there is a need for the environment to be at the center. We have done it – says the Pd secretary – The right spends its time on this to make fun of those who talk about the environment. We will not tolerate defeatist and negationist attitudes on the environment “. It is no coincidence that their examples “are Orban, Bolsonaro and Trump who are the worst on the environment”.

“On the PNRR, enough talk about renegotiating European money: they are used immediately without wasting time on propaganda because the country needs it, then says the secretary dem. And speaking of the energy crisis, he says:” A ceiling must be put on the price of gas. European and national level. This choice must be made at a European level and we want Italy to make this choice before the whole of Europe “.” The future of the country and the EU is at stake on energy – he continues – The government took important decisions on Friday. we approved, but now we need to take a step forward. In addition to aid, we must lower the bills, not just budget differences and extra money “.

“Salvini winks at those who escape”

Letta then attacks Salvini on the tax issue: “There is no desire to fight taxpayers: indeed, thanks to new technologies we want to make dialogue between citizens and the tax authorities easier, rewarding tax loyalty. ‘fiscal peace’ is the expression that Salvini uses to propose amnesties. On this I will never agree. One thing is to meet those who fail to comply with tax obligations. It is different to wink at those who escape “. “Our main proposals are two – he continues – On the one hand, to reduce the tax wedge, by cutting social security contributions to be paid by workers, to directly raise the net income. On the other hand, simplify, because today technology makes it possible to overcome some anachronistic mechanisms: I am thinking for example of the balance-account system for VAT numbers, self-employed and freelancers, as an alternative to which we propose to introduce an option of monthly self-settlement of taxes. Or I am thinking of the system of tax deductions, which we want to transform into direct transfers to taxpayers’ current accounts “.

“What wins for us is the Italy of the mayors”

“For us the one that wins is the Italy of the mayors and the good governance of the center-left – declares Letta – The many mayors who are here demonstrate our strength and our relationship with the territory, good governance and concreteness. We begin the last one. election campaign week exactly with the idea of ​​concreteness and the capacity for good governance of our mayors “. “We are in Monza because we have decided to choose a city that symbolizes good governance – says the dem secretary – but above all a city that the right was sure to win in the first round of the June vote. We were under the polls in the first round and we are when we reached the second, we were down in the polls in the second round and we won. ” Then he launches an appeal: “If we win, there will be a fairer Italy in which social justice arrives, equality is not a fairy tale and public health works. When we think that Lombardy must be governed by someone who carries on these ideas? Next year! “. “It is not possible – he concludes – that in this region, where we govern Milan, Monza, Brescia, Bergamo, Lodi and all the cities well, Lombardy is governed in this way”.