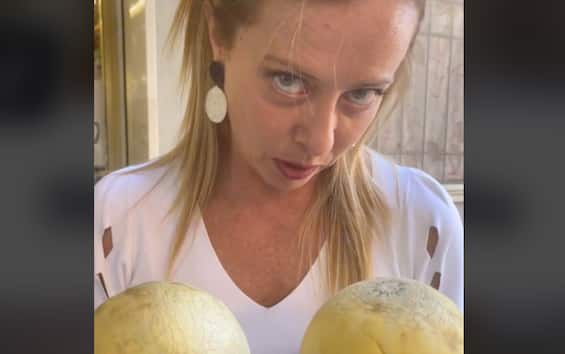 The leader of Fratelli d’Italia has published various contents on social media on the day of the political elections. The posts were shared on Twitter, Instagram, Facebook, TitkTok: among these also an ironic content with two melons in hand

Instagram, Facebook, TikTok, Twitter: Giorgia Meloni broke the silence during the Sunday of the vote for the political elections on social platforms. The day of the leader of the Brothers of Italy began with a tweet and a post on Facebook and Instagram, accompanied by a card with the face of Giorgia Meloni and the phrase “Today you can help write history”. And then two videos shared on social networks: in one accompanied by Pino Insegno, in the other joking with two melons in hand (THE SPECIAL OF SKY TG24 ON THE ELECTIONS – ALL THE LIVE UPDATES – THE INFLUENCE – TROVACOLLEGIO – THE SEAT METER – ALL THE VIDEOS – ALL THE INTERVIEWS WITH THE LEADERS – CASA ITALIA – COMPARING IDEAS: THE ELECTORAL PROGRAMS OF THE PARTIES ON SKY TG24).

“Today we write history together”

The first post in chronological order is entrusted to Twitter: “Today you can contribute to writing history”, posted the leader of Fdi Giorgia Meloni on the social network. The content is accompanied by a photo of her with the Italian flag, the words “Let’s write history together ”and the opening hours of the polling stations.

Then follows a short video, posted on Instagram. In the reel the first to appear is Pino Insegno, who says: “Gentlemen, the day of defeat will come”. A moment later the leader of FdI appears and adds “But this is not the day, you know what to do!”. Behind her you can see a stage, which could be that of the closing demonstration of the electoral campaign. Shortly after, still on Instagram and TikTok Giorgia Meloni publishes another video: in each hand the leader of the Brothers of Italy holds a round melon and ironically says: “September 25, I said everything”.