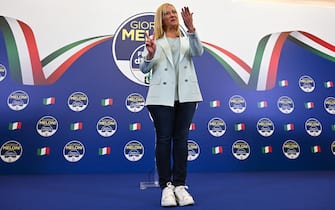 There are so many characters of the entertainment world who commented on the outcome of the political elections, who saw an overwhelming success from Giorgia Meloni’s party, Brothers of Italy, and of the coalition center-right

DAMIANO DEI MANESKIN – Among the first to comment is the Måneskin frontman, Damiano Davidwho posted the first page of Republic, writing “Today it is a sad day for my country”

Rachele Mussolini on Giorgia Meloni: a woman to be taken as an example

FICARRA & PICONE – Already yesterday evening Ficarra and Picone had made themselves heard. The Sicilian comic duo had in fact replied on Twitter thanks to the voters of Lega leader Matteo Salvini, posting a photo of the projection of his vote made by La7 and writing “Thanks to you Matté”. Il Carroccio is under 10%

Election results, political reactions in Italy and around the world

RINO GAETANO FAMILY – There was also the intervention family of Rino Gaetano, who took sides against the political use of her songs (FdI used Little by little). The nephew of the singer-songwriter, who has disappeared tragically in 1981 at the age of thirty, he declared: “It is a continuum. He can’t take it anymore: me and Rino’s sisterAnna, we have said hundreds of times that we do not like this type of initiative. Rino belongs to everyone, and politics must not appropriate it “

Meloni, Rino Gaetano family: “You don’t use songs to celebrate”

SABRINA FERILLI – Instead, Sabrina Ferilli chooses the weapon of irony, posting a story on his personal Instagram profile of a train screen reporting the punctuality of the trip. “New era”, Writes the actress

ALESSANDRO GASSMAN – He prefers the aplomb Alessandro Gassman: the actor Before post on Twitter a photo, wishing good morning with a picture showing two parts of the moon and a comment “each story has two lati ”, and then wishes good job to the government to come

Political elections 2022, the results in a map

RENATO ZERO – The singer, on the other hand, is more direct Renato Zero: upon returning from his concert at the Parco dei Principi Hotelthe same where the leader of FdI had gathered her supporters, had railed against the organizational disorder she had found: “Vote for the m **** you are“. This is not the first case: already on Friday he declared: “We were so good with Draghinow let’s go to vote as if we made the coupon of the pools”

EROS RAMAZZOTTI – Simple and direct Eros Ramazzotti who, in a story about his Instagram profile, wrote: “We are exactly what we deserve. Anonymous”

FILIPPO TIMI – Even the actor Filippo Timi expressed his disappointment at the electoral choice: “I have not voted for you” is the writing that stands out in an Instagram story

LODO GUENZI – Even the frontman of Lo Stato Sociale, Lodo Guenzihe wanted to have his say on this electoral round, analyzing in particular the problems of the left: “The truth is this is the worst left of history since the war. Inside Parliament and outside as well”

NANCY BRILLI – The actress also expressed her opinion on the elections Nancy Brilli, who used a play on words from a cartoon (“L’Italia s’è desta”, verse of the Anthem by Mameli, becomes “L’Italia s’è right”)

CHIARA GALIAZZO- An eloquent “What a disaster” on a black background is instead the comment of the singer Chiara Galiazzo, entrusted to a story on your Instagram profile

ALESSANDRO MICHELE – It’s all in a hashtag of a post on Instagram, #Notinmyname, the post-election commentary by Alessandro Michele, creative director of the fashion house Gucci since 2015

KASIA SMUTNIAK – The government and solar time. These are the references he uses to express his opinion on this electoral round actress Kasia Smutniakwho writes in an Instagram story: “In October an hour back, from today back a century”

NICOLA PIOVANI – He chooses a cinematic reference the pianist Nicola Piovani. In fact, on his Twitter profile we see a scene taken from the film “April”, where the protagonist, Nanni Moretti, decides to smoke a joint at the moment of the proclamation of the victory of Silvio Berlusconi in March 1994

ROBERTO SAVIANO – The writer, on the other hand, is more explanatory Roberto Saviano who responds to the many Twitter users who invited him to leave Italy. “I read #Saviano in trend because Meloni’s voters ‘invite’ me to leave the country. These are warnings. This is Italy that awaits us “, she writes in a tweet, accompanying it with a photo where stands a “RESIST” on a black background

FRANCESCA MICHIELIN – “Today the resistance begins. Good morning everyone 3“. This is the message that the singer Francesca Michielin wrote on her Twitter profile. The artist lashed out at the lack of voting rights for non-residents, as well as for those who do not have Italian citizenship, despite being born and raised in Italy. “The country is not real,” he wrote to a follower who didn’t think like her

He did discuss a tweet – later removed – from the British cantamte Boy George: “Hey Giorgia Meloni my straight father was violent, but you would support him and maybe you would approve the idea of ​​beating children in the name of traditional family unitbut is two gay men or women raising a child with unwavering love wrong? ”

“You deserve everything Giorgia – writes instead on Instagram the conductor Beatrice Venezi – You’ve been fighting like a lioness from day one, tireless and determined, with competence and passion, and with the strength that perhaps only a mother knows. Now another hard work begins but I’m sure you’ll be up to the challenge expectations of all the Italians who have been waiting for this moment for a lifetime ”

“Vite – The art of the possible”: the interview with Beatrice Venezi. VIDEO