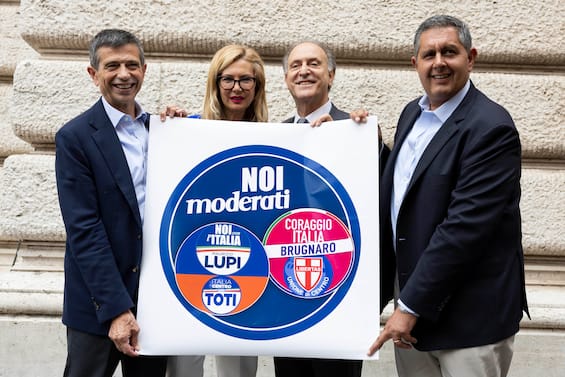 Presented the symbol that will group Udc, Courage Italy, Italy in the center and Noi with Italy. Wolves: “We are already at 3.5%”

“Noi moderati” is the name of the single list that brings together the four smaller parties of the center-right – UDC, Courage Italy, Italy in the center and Noi conItalia – which will run together in the elections on 25 September. It was presented to the press at Montecitorio. The symbol is also common: on the blue background, you can see the CI and Udc logos (the latter with the crusader shield symbol) and those recently presented by the sides of Maurizio Lupi and Giovanni Toti (TOWARDS THE VOTE, LIVE UPDATES – THE SPECIAL OF SKY TG24).

The colleges: 15 to the centrists of the center-right, another 4 from FdI

There will be 15 single-member constituencies assigned to the ‘centrists’ of the center-right coalition in view of the upcoming elections. “We start from 15 but we will improve in the next few days”, added the UDC secretary, Lorenzo Cesa on the sidelines of the presentation to the press. Initially, the colleges attributed to Noi con l’Italia and Coraggio Italia (two of the 4 parties on the list) were 11, granted by the Brothers of Italy. Those of the UDC were in fact included in the 42 available to Forza Italia, which also took charge of the Cesa party. Now with the birth of the list of moderates, 4 colleges have been added, once again sold by Giorgia Meloni’s party. The leader has been repeatedly thanked by the centrist leaders for the generosity shown and therefore the recognition of their greater political viability. Currently, therefore, FdI drops to 94 seats, 70 remain in the Lega and 42 in FI.

In the morning, the president of Noi con Italia Maurizio Lupi, speaking of a survey carried out by EMG, reported that the single list of moderates “is already at 3.5%”. Lupi then explained: “The data of the research institute confirm the goodness of the choice to join forces to strengthen the centrist area of ​​the coalition, which not only brings consensus, but also and above all projects, ideas, reliability, experience and concreteness. . Essential elements to win elections and govern well “. The NCI leader then openly thanked Giorgia Meloni for having “shown respect for our proposal and because she gave credit to our history and understood that without the moderates, the center-right would have been poorer”.