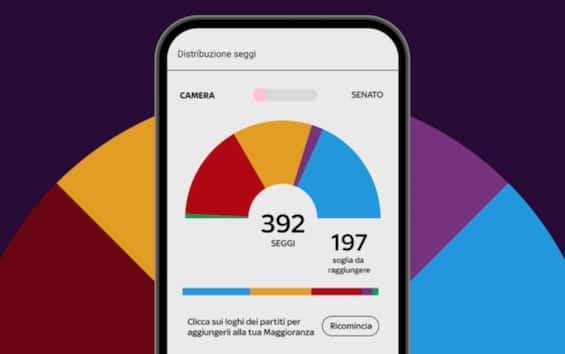 After the test to understand which party you are closest to and the “TrovaCollegio”, a new tool available to Italians in view of the vote: the “Seggiometer”. It allows readers to visualize, through YouTrend’s election algorithms, how national party percentages could translate into seats based on current electoral law. Once the hemicycles are formed, it also allows the coalitions to be broken down and reassembled, to understand how a government majority could be formed

The political elections of 25 September are approaching and, after the test to understand which party is closest to and the “TrovaCollegio”, Sky TG24 is making a new tool available to Italians. This is the “Seat meter” (TOWARDS THE VOTE: THE SPECIAL OF SKY TG24 – ALL VIDEOS).

What is the “Seat meter”

The “Seat meter” is a tool that allows readers to visualize, through the electoral algorithms of YouTrend, how the national percentage data of the parties could translate into seats in the Chamber and the Senate on the basis of the current electoral system. The instrument, once the chambers of the Chamber and Senate have been formed, also allows the coalitions to be broken down and reassembled, to understand how a government majority could be formed.

How does it work

The calculator is based on the national voting percentages entered by the user, with the transformation of votes into seats that takes place following the assignment process provided for by the electoral law in force for the Chamber and the Senate – ie the “Rosatellum” – following the historical voting trends for lists and coalitions, also on the basis of the official candidacies presented in the multi-member and single-member constituencies published by the Ministry of the Interior.