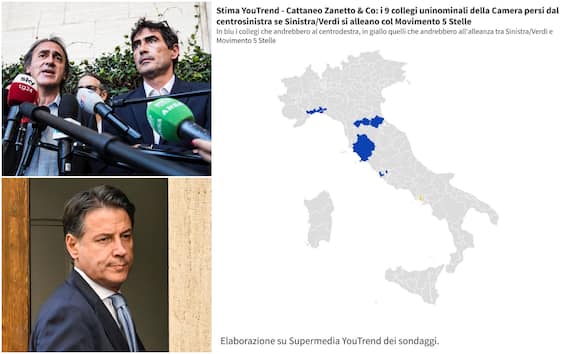 According to an estimate by YouTrend and Cattaneo Zanetto & Co, in a scenario in which the forces of Fratoianni and Bonelli joined the pentastellati, the latter would snatch 3 uninominals from the center-left, while another 11 would go to the center-right.

The pact between Action / + Europe and the Democratic Party in view of the elections on 25 September (LATEST UPDATES) was not appreciated by the Italian Left and the Greens. So much so that the alliance has decided to postpone the meeting scheduled for today with the secretary of the Democratic Party Enrico Letta: “We commonly register a profound unease in the country and in particular in the center-left electorate complex which has at heart the defense of democracy, climate and social justice – Si and Verdi explained in a note – Since the conditions on which we have worked in these days have changed, reflections and evaluations are underway that require more time “. The hypothesis then emerges that the forces of Fratoianni and Bonelli ally themselves with Giuseppe Conte’s M5S. But how many single-member constituencies would the center-left lose if it did not include the Italian Left and the Greens? To try to understand this, YouTrend and Cattaneo Zanetto & Co have developed an estimate with two scenarios.

In the first scenario we consider a center-left camp made up of Pd, Left / Greens, Civic Commitment and Action / + Europe, without the 5 Star Movement and Italia Viva. In the second scenario, however, the Italian Left and the Greens would break away from the coalition with the dem to ally themselves with the 5 Stars. In this case, the center-left would lose 9 uninominals in the House and 5 in the Senate.

To whom would the colleges lost by the center-left go and what are they?