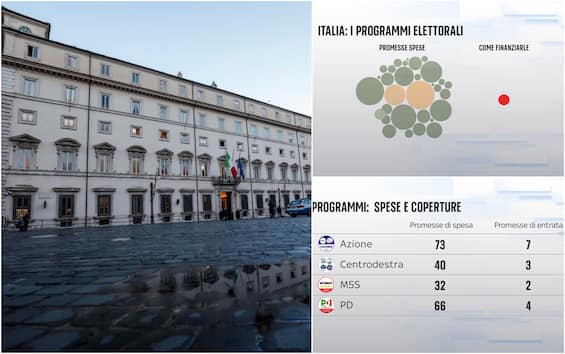 September 25 is approaching and the parties compete with each other with projects and proposals to secure the favor of citizens. However, the data and information on how to find the necessary resources are few and generic. Meanwhile, the younger electorate ran for the votes, but what are the feelings of the under 35s towards politics? These are the main themes of the episode of “Numbers – The challenge of voting”, Sky TG24 program dedicated to the elections, broadcast from Monday to Friday from 18:30 to 19:00

The vote is getting closer and the electoral campaign is filled with projects and proposals, many of which are the identity of each party. The official programs of political formations contain promises of all kinds, but data and information on how to find the resources necessary to implement them are scarce. Meanwhile, the parties are trying to secure the votes of the younger electorate, but what are the feelings of the under 35s towards the political class? These are the main themes at the center of the fourth episode of “Numbers – The challenge of voting”, the new format of Sky TG24 dedicated to the upcoming political elections, broadcast from Monday to Friday from 18.30 to 19:00 (TOWARDS THE VOTE, LIVE UPDATES – THE SPECIAL OF SKY TG24 – ALL VIDEOS).

Analyzing the electoral programs of parties and coalitions running for the elections, it is noted that attention to financial coverage for the proposed interventions is not among the issues most touched by the parties. Looking at the Action program, 73 promises of expenditure correspond to 7 promises of revenue. In the program of the center-right coalition there are 40 spending promises, 3 revenue promises. The Five Star Movement (40 spending promises against 3 revenue promises) and Pd (66 against 4) do not shine either. However, when presented, the methods of covering expenses are generic. There are two more detailed proposals found in the electoral programs. The center-right promises to review the citizenship income to make room for other interventions. The Democratic Party, on the other hand, would finance the dowry of 10 thousand to 18-year-olds by increasing the inheritance tax on assets beyond 5 million euros.

The lack of precision in indicating the coverage for one’s proposals is also denounced in the Action program, which dedicates the last page precisely to “finding the resources necessary to finance the interventions”. Calenda’s party has indicated two ways: the aforementioned fight against tax evasion and the resumption of control over spending on purchases by the public administration.

The fight against tax evasion

The parties often mention the “fight against tax evasion” among the few proposals to cover expenses. The word “evasion”, with all its derivatives – such as “evadere” and “evaders” – does not appear in the program of the center-right coalition, while it is inserted in the separate ones of the Brothers of Italy and the League. Terzo Polo and Pd mention it three times, the Five Stars once. Even when mentioned, the fight against tax evasion is often not very detailed in its practical modalities.

The risks of “shaky” proposals

Even when the necessary coverages are indicated, explains Carlo Canepa di Political report card, in fact, these are “shaky” numbers. To give an example: the dowry to the new 18-year-olds, the workhorse of the demos, would be financed by raising inheritance taxes on assets over 5 million euros. But the rates with which it is intended to do so are not specified in the electoral program, underlines Canepa. The risk of uncovered electoral promises is that of approving measures that, in order to be financed, would increase the public debt. Or drop most of the promises themselves into thin air.

The identikit of the voter under 35 and over 35

It is often said that young people feel more anger towards politics than the older electorate. This is not exactly the case, at least according to what emerges from a survey conducted by Quorum / YouTrend for Sky TG24. If 48% of the under 35 respondents feel a feeling of anger towards the political class, the figure rises to 57% looking at the over 35. The figures are therefore high, but they are not the prerogative of young people. The most common sentiment among the under 35s would be indifference (33% against 28% of those over 35). Few say they are satisfied: the percentage stops at 6% for the youngest and 9% for the older ones. 74% of under 35s say they have “little or no” faith in our politicians. Also in this case, the data belie the narrative that disaffection with the political class is only a prerogative only of the very young: the over 35 who do not trust are over 80%. Only 21% of under 35s say they trust politics “a lot or enough”, compared to 17% of over 35s.

One of the reasons for the lack of satisfaction with the political class of the youngest people would be that the parties are not caring enough about their prerogatives. Not only 80% of the under 35 think so, but also 85% of the over 35. This despite the fact that in the electoral campaign we are trying to intercept the votes of the lower age groups even with the presence on social networks, such as for example TikTok, on which Enrico Letta and Silvio Berlusconi also landed.

The themes most dear to young people

Looking at the major macro-themes of the electoral campaign, it can be seen that the prerogatives most felt by young people do not always coincide with those of older adults. Work, for example, is very important for 58% of the under 35s. With reference to the over 35s, the percentage rises to 71%. The proportions are reversed in the case of education and university, which is important for 49% of the under 35s but only for 33% of the over 35s. There is also a big gap with regard to the environment. If 49% of those under the age of 35 judge it as a fundamental theme, the argument is heard only by 29% of those who are over 35 years old. The same difference of views also touches on issues such as gender identity and civil rights: very important for 29% of the youngest, they are very important for only 13% of those over 35. The survey also shows that voters under 35 are more attentive to international issues. 23% think that relations with the European Union are to be kept at the forefront of politics. Among the over 35s, only 7% of the interviewees think so. Almost the same can be said for foreign policy in general, considered crucial by 27% of under 35s but only by 5% of over 35s.

For those under 35 and over 35 will vote