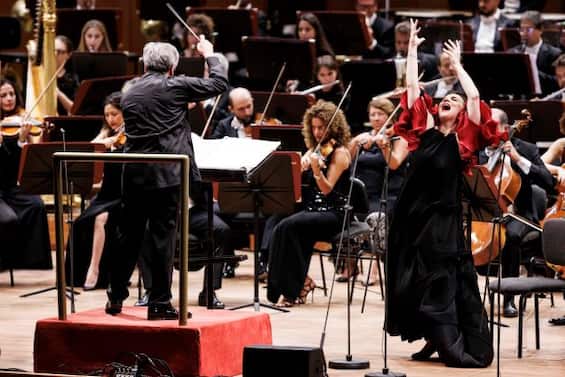 One hundred minutes without pause, a single act that plunges you into a mysterious and dark ocean of violent hatred and sublimated love, of revenge, heroism, triumphs and defeats of conscience, the inviolable will of the gods of Olympus. Elektra by Richard Strauss is Greek tragedy and Central European decadence, it is song with an inexorable rhythm and music sparkling with a thousand lights and reflections. “A subject that shows a wild side, I would even say bestial. However, it also has a human, fragile, moving side ”, Antonio Pappano, the musical director of Santa Cecilia, told us during an interview.

The myth from which Elektra it comes from the Hellenic one told by Sophocles and rewritten by Hugo Von Hofmannshtal: Electra hates her mother Clytemnestra, who murdered her husband Agamemnon, king of Mycenae, with the complicity of her lover Egisto. Electra wants to avenge her father by killing her two and prepares to do so when her brother Oreste arrives unexpectedly. It is he who massacres his mother Clytemnestra and the usurper Egisto in the royal palace. Revenge is done, Electra has reached her existential purpose, she indulges in a hysterical dance and falls to the ground, dead.

The performance in concert form that inaugurated the 2022-23 season last night allowed the audience to focus on the music in continuous movement and on the dark, dense verses translated into Italian on a clearly visible screen. No costumes, no scenography, actions just mentioned by the singers.

Great directors have staged Elektra, but this time, at the Parco della Musica, all the attention was for the sound. “There is a gigantic orchestra that indulges every little word. In itself the orchestral part is theater. I can say it is one thing extremely extremebut also of rare beauty ”, comments Pappano.

The opera dates back to 1909, when the musical language was radically changing: a work that was avant-garde then and which maintains a harsh and disruptive power even today. The performance has fully highlighted how much music and words chase each other and respond to each other in an overall effect that has created amazement and tension.

A long round of applause

Compact and very long applause at the end of the concert: the largest share went to Pappano, who began his last year as musical director of Santa Cecilia. Appreciated Ausrine Stundyte, the Lithuanian soprano who gave us a haughty and manipulative Elettra. Many applause also for Petra Lang, the mezzo-soprano of a Clytemnestra dominated by the fear of fate. Elisabet Strid, soprano, completed the picture of the main women of the opera: her Chrysothemides, Electra’s sister, was a woman overwhelmed by a story that was too big for her. Neal Cooper’s Egisto and Kostas Smoriginis’ Oreste have had their share of clapping. The roar of applause became greater when the orchestra and choir of the Academy received it. The latter appears in the stands overlooking the stage in the final part of Elektrapronouncing the fateful name of Oreste with impressive power.

It was the first performance of Elektra in the concerts of Santa Cecilia, which has a mainly symphonic tradition.

Leaving the hall at the end of the performance I casually hear a fragment of conversation between two spectators lined up next to me: “I didn’t think it was so beautiful, I had never heard it,” he says to one another. I rejoiced for this unknown gentleman: the day a masterpiece enters your life is a memorable day.