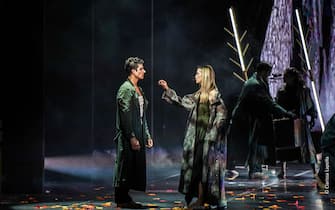 Eleonora Abbagnato, the first Italian to hold the role of étoile of the Opéra de Paris, returns to dance on the Parisian stage and brings with her the Compagnia del Lirico Capitolino directed by her. On 13, 14 and 15 January The four Seasonsballet by Giuliano Peparini to music by Antonio Vivaldi, arrives in Paris in the staging of the Teatro dell’Opera di Roma which saw its world premiere in 2020 at the Circus Maximus – ph Clarissa Lapolla

It is not Peparini’s first creation for the capital’s theatre, but it is certainly the most significant. With this title, the corps de ballet has returned to perform for the first time in the presence of the public since the lockdown – ph Clarissa Lapolla

Classical dancers, the most famous Italians from Carla Fracci to Roberto Bolle. PHOTO

The Roman choreographer and director had conceived the show in the summer, for the large open spaces in compliance with the anti-Covid regulations, and then revisited it in the autumn for the more intimate one at the Teatro Costanzi in Rome – ph Clarissa Lapolla

A little over two years later The four Seasons returns to the scene and conquers the Palais des Congrès. A true Parisian icon, it is the reference point for major international events. Inside, one of the most emblematic spaces is the Grand Amphithéâtre where the Capitoline company will perform in front of a sold out audience of 3,700 – In the photo, Eleonora Abbagnato and Michele Satriano – ph Clarissa Lapolla

Jacopo Tissi, Marianela Nuñez and more: a parade of stars for Il Corsaro at the Rome Opera

“After the extraordinary success of the Don Quixote – says the superintendent Francesco Giambrone – which was sold out in all the performances, this first tour of our corps de ballet after the pandemic confirms the very high level reached by the company under the artistic guidance of Eleonora Abbagnato who, among other things, will also be the protagonist on stage . A precious opportunity to rediscover this extraordinary artist on the Parisian scene so important in her career” – In the photo, Eleonora Abbagnato and Michele Satriano – ph Clarissa Lapolla

The story of the natural “seasons” of love conceived by Giuliano Peparini on the famous music of Vivaldi, on a recorded basis and performed by the Orchestra of the Teatro dell’Opera, is completed by interludes of strong emotional impact: texts by Alda Merini, Kahil Gibran , John Donne, Cesare Pavese, Vincenzo Cardarelli and Jacques Prévert interpreted by the reciting voice of Alessandro Preziosi – In the photo, Eleonora Abbagnato and Michele Satriano – ph Clarissa Lapolla

The exceptional couple formed by Eleonora Abbagnato and the principal dancer Michele Satriano are the protagonists with the corps de ballet of the Rome Opera. Their gazes will meet for the first time with modesty (Spring), they will then move on to the fires of passion (Summer) and, after the progressive shutdown (Autumn), we will reach the frost of relationships (Winter) – ph Yasuko Kageyama

Carla Fracci, the Rome Opera pays homage to the étoile with its version of “Giselle”. VIDEO

The creation sees sets and costumes marked by an essential linearity, respectively signed by Andrea Miglio and Anna Biagiotti. The contribution of the lights by Alessandro Caso and the videos by Edmondo Angelelli and Giuliano Peparini are fundamental – ph Yasuko Kageyama

The corps de ballet of the Rome Opera will therefore be the star of a double appointment in Paris, with great dance and haute couture – ph Yasuko Kageyama

After the premiere on Friday 13 January at 20, the show will be repeated on Saturday 14 at 15 and 18, Sunday 15 at 16. In the photo, Eleonora Abbagnato and Michele Satriano – ph Clarissa Lapolla

From Alessandra Ferri to Jacopo Tissi, from Viviana Durante to Eleonora Abbagnato: the most famous Italian classical dancers