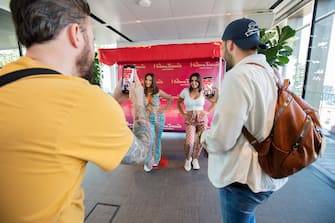 Madame Tussauds Amsterdam today presented the wax statue of Elettra Lamborghini which, starting next week, will be exhibited at the Dutch museum

WATCH THE VIDEO: Elettra Lamborghini, the backstage of the creation of the wax statue for Madame Tussauds in Amsterdam

During the press event it was the same Elettra Lamborghini – singer, and successful character all over the world – to reveal to all the participants the work created, after a choral countdown that culminated on the unmistakable notes of one of his successful musical hits: Gunslinger

Elettra Lamborghini, the wax statue at Madame Tussauds in Amsterdam

About 20 people contributed to the construction of this statue, which took 6 months of work and cost around 250,000 euros. The works began in September 2021 when Elettra went, in secret and far from social media, to Madame Tussauds in Amsterdam where she posed for more than 3 hours in front of the sculptors, who took all her measurements, took hundreds of photos and detected all the details useful for the realization of the statue

Then a clay statue was first made and immediately after a mold in which the wax was poured, so as to obtain the final statue. Real hair was then applied to the statue and it was painted entirely by hand with oil colors, creating shades and recreating the original skin tone; the goal was to achieve a high degree of realism, the strength of Madame Tussauds that made it famous all over the world

Elettra Lamborhini, out the video of “A Mezzanotte”

The experts have also created a 3D scan that faithfully reproduces all the characteristics of Elettra and which represents an additional tool for a perfectly proportioned wax statue.

Elettra Lamborghini shows side B on social media: true like me

“We are identical, crazy!”, Exclaimed Elettra at the first meeting with her statue, during which the singer was able to closely observe every little detail, from the color of her hair and eyes to the features of her face.

Elettra Lamborghini ,. the videoclip of the single “Pistolero” is out

The multi-platinum artist has in fact been faithfully reproduced in every detail, including piercings, spotted tattoos and the engagement ring that binds her to the Dutch DJ Afrojack

Elettra Lamborghini, the text of “Pistolero”

“I am really proud to have been chosen by Madame Tussauds of Amsterdam as the first Italian wax statue to pose, it is a great emotion and satisfaction at the same time” commented Elettra “It was difficult to pose for so many hours but today I can say that it was worth it, the statue is really impressive, I find myself in every detail ”

Annemiek Dolfin, Head of Marketing at Madame Tussauds Amsterdam he commented, explaining the reasons that led them to choose Elettra Lamborghini: “Our team conducted many surveys, with social analysis, Google searches and sample questions to visitors before choosing Elettra. Her eccentricity and her surprising style make her a very popular character among the Italian public as well as the most requested figure for the representation of her own wax statue ”

Elettra Lamborghini, photos of the sea with her husband Afrojack