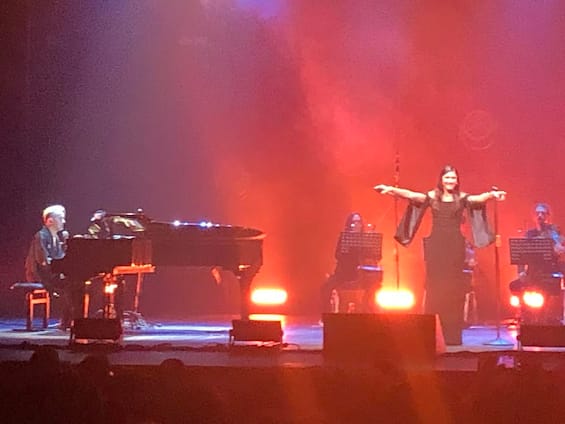 Elise And Dardust…and who would have thought so. From the Friulian artist’s participation in a charity evening organized by Dario “big heart” Faini in his Ascoli Piceno, a project of unique fascination has sprouted. Andrea Rigonat on guitars and then on strings are joined by Caterina Coco (first violin), Alessio Cavalazzi (violin), Matteo Lipari (viola), Valentina Sgarbossa (cello) and Simone Giorgini (double bass). The beginning is enveloped in a magical, Dickensian atmosphere and has a start…Duality, vibrant and rough, which Dardust then makes sweet and Elisa arrives dressed in black, very feminine, she sits down and Dardust’s piano makes the stage as the notes of Like you no one ever. There Silent Song is Promise mewhich is a true act of love and to increase its sacredness asks the public for first aid, which is not caught unprepared.

Even brittle has a poetic incipit: hold me up when I’m about to fall…strength is fragility which through Elisa’s voice become emotions. She now she stands up and spreads her arms like a pagan goddess to transform weakness into energy. And to stay in the mending it’s time to A poem for you too which follows labyrinth: here the strings drag us into this very sweet song which transforms Elisa, at the end, into a gesticulating conductor of a choir of 1750 people, so many are those that fill the Europauditorium of Bologna. With A silk thread in the abyss silence falls in the room for this melancholy song that seeks where the thread that united us is broken. The arrangements convey that right nervous sensation that populates the abyss where there is no courage because one is lost. No hero is a gem of world music that the public appreciates and sings enraptured by Elisa’s high notes. Now she climbs high, spreads the wings of the heart with The soul flies which glides over us like a caress and develops a stadium chant: “Bologna I feel your energy arriving here! Something that is missing He shows her gathered up, almost bent over on the chair, then spreads her arms and looks like a hawk of the soul.

The invitation now is to go wild, a suggestion that will reach its climax in the finale when a good part of the audience gathers cheering under the stage, and does so with its Silk: “Let’s dance a bit”, she yells and then transforms into a charleston dancer, an ironic and sensual vaudeville soubrette. The curtain closes and when she opens again she welcomes us Dardustalmost Wagnerian. Starting from his fresh and creatively libertine double album Duality it takes us through the four seasons starting from winter. About ten minutes of stunning beauty, with a finale between snaps and clapping hands and feet. Yet feel (a sense of you) Elisa gives us back for the second act of theAn Intimate Tour which through a play of lights transmits an immense desire for life. “Let’s go to Sanremo but not this year”: with these words Elise presents Or maybe it’s you and what a thrill this vertigo that is no longer scary. Remember that If it rained your name born here, written by Calcutta and Dardust. She is increasingly mistress of the stage. With Light (north east sunsets) remember that “let’s go back to Sanremo” is like the wind in the trees…talk to me! Brilliant The obstacles of the heart. With an almost country start that then soars on sound levels from the Teatro della Scala. The finale is from his Anglophone season but the language of the Bard of Stratford on Avon is not an obstacle: first there is Stay and then Togetherwhere the plan of Dardust it becomes stormy with dark and clean sounds, almost geometric as only he can create. And there’s a sweet memory of Faron of Prefab Sprout. The ending is festive with a heartwarming Stille Nacht, Heilige Nacht: Elisa is sitting at the piano with Dardust and also a bit “annoying” in hopping on some key and on the other hand it’s Christmas and Madame Toffoli has to play the Grinch for a few seconds. Then she gets up but both remain under a cone of light for what is a small masterpiece that the audience listens to dumbfounded. The farewell is with Your way: “This is my last sustainability message for this year, give trees away, plant them…it’s an important way to take time and give it to future generations. This last message is for everyone, it can no longer be just for children as in the original idea of ​​the song…Bologna always ahead your way!”.