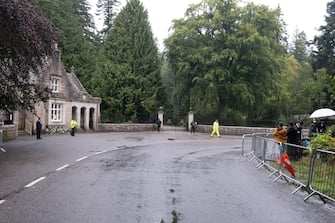 THE PATH OF THE FERETRO – The Queen’s last voyage has begun. At 10 am today, Sunday 11 September, the coffin left from Balmoral Castlewhere Elizabeth II died Thursday 8 September, and crosses several iconic places of Scotland before arriving in Edinburgh, where he will stop for the night in the palace of Holyroodhouse before the procession to the Cathedral of San Gilles on Monday. This event will be the last in Scotland before leaving for London

THOUSANDS OF PEOPLE – I’m thousands of Scots who are preparing to pay homage to the sovereign. The first minister Nicola Sturgeon he said it will be an opportunity for people to “come together publicly and start marking the shared loss of our country. Her Majesty’s death at Balmoral Castle means Scotland has lost one of his most devoted and beloved servants. It will be particularly touching to see His Majesty’s coffin start his journey from his Aberdeenshire home to Palace of Holyroodhouse in Edinburgh”

THE SECURITY – In this regard, they have all been prepared the most stringent security measures, in order to ensure that the trip takes place in total serenity. The lay-bys and access roads along the route will be closed and those wishing to leave flowers have been asked to do so in designated areas. “If you attend the Queen’s procession, please do not leave your vehicle on the side of the road as this is a risk to public safety, ”said the Scottish Deputy Chief of Police Malcolm Graham

Kings and Queens of the United Kingdom: all the English rulers of history

THE STAGES – But what are the stages of passage of the coffin? According to the Press and Journalthe coffin, after the departure at 10 from Balmoral, is planning several stops in theAberdeenshire before reaching the capital. In particular, the car will go along the banks of the River Dee and Crathie Kirk, which the queen adored during her stays in Scotland, before reaching Ballater where he could stop for a short ceremony. A village that has a deep relationship with the Royal house since the time of Queen Victoria

Elizabeth II, the real soft power between crisis and challenges

ABERDEEN – Then it will be the turn of Aberdeenfrom where it will pass before heading south: this is why the hearse is expected to take the Great Southern Roadsteps on the bridge King VI, named after his beloved father, which crosses the River Dee and was opened by the Queen Mother in the presence of her husband King George VI December 10, 1941. Pictured is the Queen during a visit to Curl Aberdeen, il October 4, 2005

DUNDEE – From Aberdeen the procession will take the coast road south beyond Portlethen and Stonehaven, and then inland through the Angus countryside and beyond Brechin. Once the procession will reach Dundeewill tour the city on the Kingswaybefore traveling in the direction Perth, in the direction of Friarton Bridge. In the photo the queen at the reopening of Baxter Park in Dundee in 2007

DIRECTION EDINBURGH – Once past Perth, the coffin will take the M90 ​​and head past Queensferry Crossing in the direction of Edinburgh. In the capital the procession will enter from the west of the city, along the coast Edinburgh Castle and will run the full length of the Royal Mile to Holyroodhouse Palace around 16:00. In the photo, Elisabetta and Filippo in the gardens of the Palace in 2014

WHAT WILL HAPPEN MONDAY – The Prime Minister and the leaders of the opposition party will gather in the Scottish Parliament to observe the passage of the coffin. King Charles is expected to travel to Edinburgh on Monday where, starting at 19:20there will be the traditional Vigil of the Princes in the presence of the whole royal family. There will be a religious function and then members of the public they will be able to parade in front of the coffin for a period of 24 hours. On Tuesday the coffin will take a plane in the direction London, where there will be other celebrations and state funerals