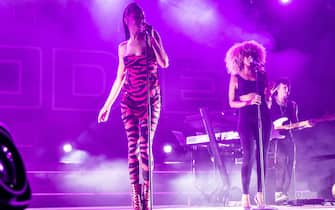 Elodie sold out at her only summer concert at Circolo Magnolia. Over an hour of show between covers and great hits

WATCH THE VIDEO: Elodie, the video of the new song “Tribale”

Elodie enchanted fans with her songs and also with her look: for the occasion the artist showed off a red zebra-striped mini dress with a pair of leggings and matching ankle boots

WATCH THE VIDEO: Elodie tells the love with Marracash

As a second look she chose a crop top, high-waisted leggings and a pair of turquoise ankle boots with a tie dye print

Elodie was not alone on stage: with her were the backing singers Tahnee Rodriguez and Yana C, the DJ Margherita Grechi, the drummer Riccardo Aguiari and the multi-instrumentalist Niccolò Savinelli

Elodie and love with Marracash: “It was the human being that most upset me”

Elodie, the video and the lyrics of the new Tribal song

Elodie also sang No love songs of Marracash, her ex-boyfriend. A relationship, theirs, that she has made and continues to make fans dream also because it doesn’t really seem over

Elodie godmother of Roma Pride with the song Bagno a Mezzanotte

The curiosity was also fueled by the fact that Marracash was in the audience applauding Elodie, as documented by the stories of the rapper himself

The best concerts of June 2022