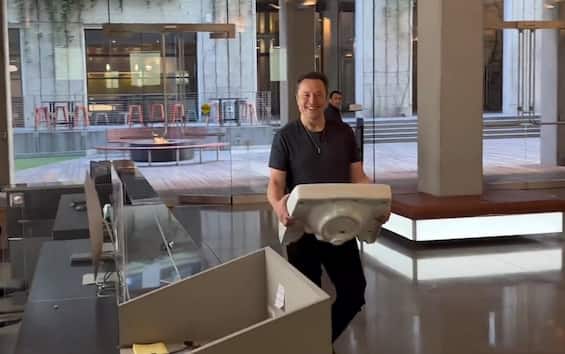 He bought Twitter out of “love” and the desire to “help humanity”. Thus Elon Musk underlined the purchase, for 44 billion dollars, of the famous microblogging platform. “The bird is free,” he then tweeted in reference to the blue icon that distinguishes the social network.

The South African entrepreneur therefore completed the process to acquire the social platform and immediately decided to make a clean sweep, firing four top Twitter managers, including CEO Parag Agrawal. The other torpedoed were the chief financial officer, Ned Segal, the head of legal affairs and policy, Vijaya Gadde, and the general counsel Sean Edgett. Situation that created havoc in the San Francisco headquarters, where Musk had already arrived in the past few hours with a large sink with a cryptic meaning.

Musk: “I do it to try to help the humanity I love”

“I buy Twitter because it is important for the future of civilization to have a digital common square where a wide range of ideas can be discussed in a healthy way without resorting to violence,” reiterated one of the richest men in the world. And he then underlined, again, that he wanted to avoid social media being divided into “sound chambers of the right or the left that generate more hatred and divide the country.” This is because, he said, “in relentlessly searching for clicks, Traditional media has fueled extremes. That’s why I buy Twitter. Not because it’s easy, not because it makes money. I do it to try to help the humanity I love. And I do it with humility, acknowledging that despite the best of efforts , there is a real possibility of failing “in trying to achieve goals.

What can happen now

Musk has therefore tried to reassure about his intentions, now that he has also added Twitter to his immense empire. To advertisers, worried about possible fewer controls on content, he explained that the social network “will not become a hell open to all” and that it will be a place where “you can say anything without consequences”. Then, here is a message to the employees of the company, according to which there is no intention to cut the workforce by 75%, as hypothesized in recent days by some media. Among Musk’s intentions, according to the press, is to revolutionize the platform, also using it as an “accelerator to create X, the app of everything”. And perhaps that of removing the “censorship”, with the possibility of a return of Donald Trump to the platform, after he had been banned for having instigated the assault on the American Congress.