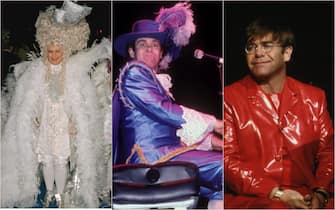 Disguises and leather outfits, but also glittery costumes, skirts and wigs: Elton Johnwhich takes place on 25 March 75 years old, he is loved by the public as much for his music as for his looks. Here are some of the most eccentric shown off from the 70s to today

WATCH THE VIDEO: VIDEO Elton John, the 6 most famous songs

Unforgettable the performance at Wembley Stadium for the Midsummer Music festival a London, in 1975, in which the artist appeared on stage with what would later become his “unofficial” uniform: a tight-fitting jumpsuit sprinkled with decorations

ALL NEWS ON ELTON JOIHN

Also in 1975 the singer received the Star on the Walk of fame in Hollywood and also for that occasion he made himself stand out: his suit was decorated with stars, to recall the recognition

Elton John in concert in Milan in 2022: it will be the last in Italy

A year later, in 1976, Elton John wears a Bob Mackie creation for his performance in the historian Dodgers Stadium in Los Angeles. This is a costume covered with crystals, with the words Dodgers: memorable

Also unforgettable is the dress of yesteryear, an almost musketeer costume, which Elton John wore in 1982 at the Madison Square Garden in New Yorkfor a concert

Sunglasses, eccentric headdress and wide dress: here is one of the most popular looks risky of the artist, flaunted in 1984

In 1986 the artist sported a pink crest and a black dress, sprinkled with silver stars: it is another look conceived by Bob Mackie

The 90s arrive and the eccentricity remains: the looks are famous entirely in leatherincluding a bright red suit – boots included – worn in Paris in 1994

In 1997 Elton John celebrated its 50 years: for the occasion he could only wear a sensational costume, from the past, all white, with attached feathers and wig

Even in recent years Elton John has continued to be a style icon: here he is in 2018on the occasion of the Grammy Awards, with a suit (including glasses) of sequins

And sequins and sequins have always been great classics in the artist’s looks: here it is in 2021, with an iridescent purple jacket