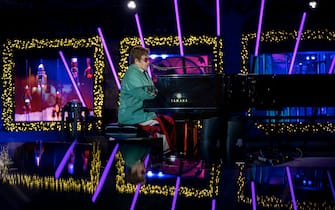 On Tuesday evening the legendary Elton John blocked the traffic of Fifth Avenue, the beating heart of Manhattan, to play with a grand piano Your Songhis first hit to top the US charts.

The performance, which surprised passers-by, came two days after the pop star’s farewell to the North American scene with the three-night Farewell Yellow Brick Road Tour at Dodger Stadium live streamed on Disney+, and kicked off the season Christmas shopping scene of the Saks Fifth Avenue department store, lit up for the holiday

Joni Mitchell to Elton John: ‘My new album is coming’

Saks has donated one million dollars to the Elton John Aids Foundation, which pursues the goal of doubling down on the fight against AIDS. “I can think of no more magical way to close my Farewell Yellow Brick Road Tour in the US than to be here on Fifth Avenue with my family, experiencing both my music and my work with the Elton John Aids Foundation showcased New York City’s most iconic Christmas and light show,” said John

John shared the magical moment with his family: husband and life partner David Furnish and two sons Zachary, 11, and Elijah, 9. “Absolutely, he will never tour again,” Furnish said. “Those days are over and he’s pulled the curtain down. He quit,” because “he finds it very hard to travel and incredibly difficult to be away from his family. And, you know, our kids will be 10 and 12 and they’ll reach the age where we feel like they’ll need us more than ever.”

John made a grand entrance in a golf cart decorated with big bright stars, dressed in a green jacket and red sweatpants. After greeting and sending kisses to the audience, the pop star in the company of her family started the countdown to her touching performance in the masterpiece Your Song

From Angelina Jolie to Elton John, all the stars of the queen. PHOTO

“It’s one song because we can’t close Fifth Avenue for long, or we’re going to have a lot of angry New Yorkers,” Furnish joked.

In between the final fireworks, the facade of Saks department store exploded in the blaze of a light show designed to look like a tree and flash with a medley of John’s songs, including his dance hit Cold heart sung with Dua Lipa

Even the windows came to life, including the one in honor of John’s famous song Rocket man, with rockets going up and down on pistons

John, happy with the collaboration with Saks making the world “a brighter and welcoming place this holiday season and beyond”, explained that “although it is the happiest time of the year for many, we must not forget the millions of people around the world for which safety, respect and dignity are not guaranteed”. With the support of Saks, the Elton John Aids Foundation will seek to “end the stigma and discrimination that prevent so many people from accessing to compassionate and life-saving HIV care”

Elton John, his last time in Italy at San Siro