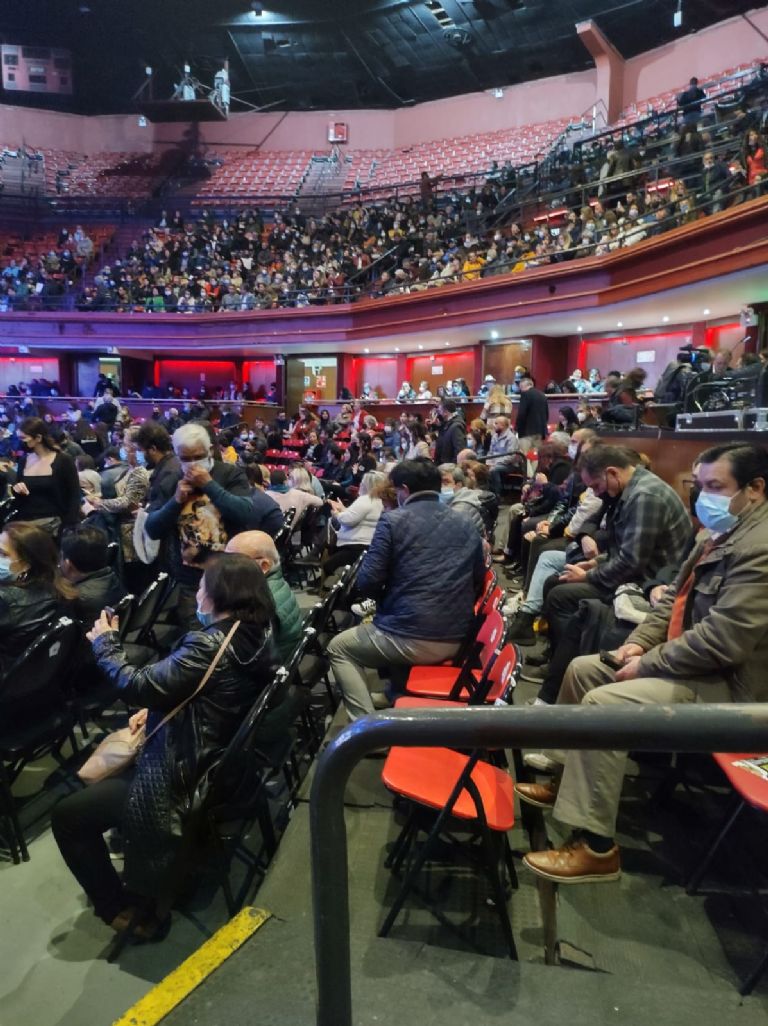 The legacy of Elvis Presley was revived in symphonic mode on Wednesday the 28th in the Santiago night. After a hot day, the Caupolicán theater was the destination to finally be able to meet “El Rey” after 3 schedule changes and a little more than 14 years since the same show was presented for the last time, at the end of April 2008.

In the vicinity of the coliseum, the queue was enormous and very calm people took their seats. Although the Caupolicán was not full until it collapsed, few seats were left empty.

To enter the box areas there was a small team of people who were in charge of taking everyone to their seat, which made entry quite expeditious. However, the suggestion of a tip for this service at times of cards and transfers left more than one with deep embarrassment, feeling that a false pettiness was evidenced by not carrying cash. In the gallery things were a little easier because the seats are not numbered.

Little by little the Caupolicán Theater began to fill up. Smells of tobacco, leather, perfume, medicines gradually appeared. Some young people moved among the attendees with trays, offering bottled water and other beverages. With that, I understood why they made me throw out the mineral water I was carrying in my backpack at the entrance. Difficult for things to get wild enough to use the projectile bottles. Although you never know.

After some whistles and a couple of Russian applause as a show of impatience, at about 9:12 the lights went out. Now with the musicians in position and Damien Mahler while conducting the orchestra, the first chords began to sound. There was a round of applause.

Two screens were arranged on stage, the smaller one in front of the larger one, covering an important segment of the larger picture. Both canvases showed different images, which at times caused a feeling of video collage

Later, Priscilla Presley took the stage as hostess. Elegant, she wore black pants, a wide blouse with a round neck and long sleeves, with vertical gold strips.

He warmly greeted the public and, always in English, gave a friendly welcome, completely forgetting that he was in a Spanish-speaking territory. The interpreter must have summarized her words since Priscilla, enthusiastic about her, did not stop at first to give space to her translation. That caused a funny moment.

When he came down from the stage, discreetly was located at the sound table, in the box areato watch the show. The photographers present and some assistants, respectfully and without making much noise, got up to photograph her, but the commotion did not last long and Priscilla watched the show attentively, with a sharp eye, as she was supervising.

However, that was not the only time priscilla went on stage. In the second opportunity, she appeared to explain the second part of the show where she expressly requested that let’s try to listen to Elvis’s voice, mentioning his heartfelt interpretation.

“The second part of the Show is called “Just Listen”. I ask you to please just listen to his voice. Elvis went deep into himself and put his soul and his being when he sang. If you listen to his voice, you can probably feel what that he felt when singing”.

The first theme of this segment of the show was It’s now or never since according to Priscilla it was the biggest hit she had, followed by In the Ghetto, “… a song with a very political character and with great social commitment since the lyrics touched him in a special way, although he did not like to touch on political issues” she said moved.

The segment ended with How great you are. Priscilla Presley explained that this song was dedicated to her in Las Vegas, because she had lost her horse called “Domino”, a pet that Elvis himself had given her. The horse was very gentle, in the words of Presley’s widow.

“At that point he offered to buy me another horse. Anything I wanted. But I told him I didn’t want another horse, I just wanted Domino because she was special.”

The song would be a consolation for her about her sad loss. She left the stage but not before saying: “listen to her voice, listen to what she says, listen to Elvis’s heart”.

in it’s now or never a timid singing from the public was heard, almost a murmur trying to respect the will of the hostess. The audience was adorable.

The third appearance of Priscilla Presley on stage she went with chairs for her and her translator. Both settled comfortably, in front of the orchestra while behind their backs images were projected on the screens, which were kindly explained by its protagonist.

They were home videos, family videos, of everyday moments in the privacy of the home or on vacation. The public seemed pleasantly pleased with this little snooping and proximity to one of the greatest idols that music has given to humanity.

Within Priscilla’s comments about her private life, she said that Hawaii was Elvis’s favorite place to go on vacation, but what resonated in the ears of those who are capable of admiring Elvis’s beauty with relish, was that it was “a great kisser”. The sighs and the cries gave an account of the enthusiasm of an elegantly stimulated imagination.

Finally, Priscilla appeared one last time to thank and say goodbye. “He was here tonight and the love you showed for him was fantastic. Thank you for keeping him in his hearts.”

In the progression of the event, one of the things well thought out was the choice of videos, since as the show progressed, images of an increasingly agitated Elvis appeared. There were moments in the show where the audience really felt Las Vegas.

The vigor and excellent execution of the musicians made the vibration of the instruments make our hearts resound to the rhythm. The director’s emotion along with his graceful movements gave the scene a mystique.

With If I Can Dream The end of a day full of emotions and nostalgia arrived, where the true wonder was in the expressions of the fans who, with their generous years on top, still allowed a glimpse of the adolescents they were in remote times.

They clapped, they sang, some screamed and laughed when, for the thousandth time, Elvis kissed someone in his audience, through the screen, as if it were a space/time portal. As if, by giving in to the tacit contract of abandoning themselves to the illusion of the magician, the emotion gave them more than a second with the idol.

Priscilla generously contributed greatly with her presence, sense of humor and kind words to make all of this happen.