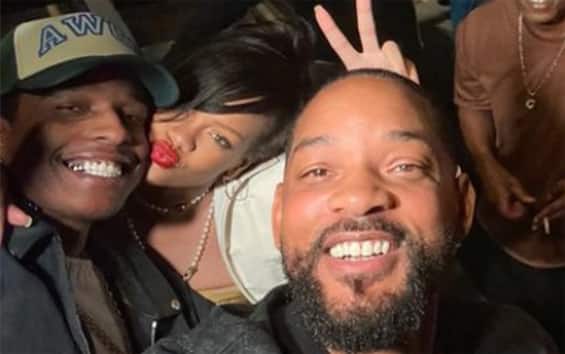 Emancipation, new film by Antoine Fuqua on slavery, marks Will Smith’s return to the scene after the slap given to Chris Rock on the night of the 2022 Oscars. The world has stopped for that moment of anger that sparked numerous controversies and questioned the future of the actor in the Hollywood industry. It took place a ‘private preview from Emancipation and artists such as Dave Chappelle, Rihanna and ASAP Rocky were in attendance alongside Smith as evidenced by a photo posted on Instagram.

Rihanna, Chappelle, Kenya Barris, ASAP Rocky and other stars attended the private screening of Emancipation with Will Smith who has thanked for the presence and support his colleagues on social media. In Fuqua’s film the actor plays one slave on the run who becomes known as “Whipper Peter” when photos of his keloid scars on his back are released to disaffect the brutality of slavery. Emancipation follows his character as he navigates the swamps of Louisiana to escape the plantation owners who nearly killed him.

Reaction after the private preview of Emancipation

“I am still haunted by Emancipation“Perry wrote in her Instagram story.” It really is powerful, moving and captivating. And the subsequent conversation with this group was legendary. Thanks, Will Smith, for the preview. Barris also posted a story on Instagram, writing: “Emancipation it’s true art, power and everything a film should be ”. The film will be released on December 2 at the cinema and streaming on Apple TV + on December 9 (it will also be visible on Sky Q and via the app on Now Smart Stick).

Will Smith’s current situation with the Academy

Smith is currently bandit from the Academy of Motion Picture Arts and Sciences for 10 years because of his actions at the 2022 Oscars. The actor posted an apology video in July in which he called his actions “unacceptable.” of me thinking it was the right way to behave in that moment, “says Smith, who at times sighs deeply and seems to hold back tears, in the video.” It’s all blurry. I contacted Chris and the message that he is back is that he is not ready to talk, and when he is, we will ”.