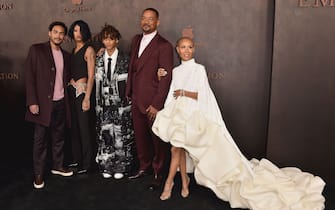 Large crowds at the Regency Village Theater in Brentwood, Los Angeles for the premiere of Emancipation – Beyond freedom, a film that will debut on December 9 on Apple TV + (it will also be visible on Sky Q and via the app on the Now Smart Stick). Will Smith, star of the film directed by Antoine Fuqua walked the red carpet with his entire family

emancipation arrives in the middle of a difficult season for Smith to say the least, at the center of controversy for his behavior during the night of the 2022 Oscars, an event in which the first act of what is now known as the Slap-gate took place

WATCH THE VIDEO: Emancipation: what we know about the film with Will Smith

Both the actor and his wife, Jada Pinkett Smith, have released several interviews and statements in which they have provided their version of the events of the night of March 28th. Over the last few months, the rumors about a probable divorce of the couple have become more and more insistent, and the other night they appeared in great harmony on the red carpet

Emancipation, Will Smith in the new trailer for the film by Antoine Fuqua

To the many talks about the increasingly probable divorce of the couple, in crisis for several years, was added the news of Jada Pinkett Smith’s working on a memoir

Emancipation, the new film with Will Smith has a release date

In the autobiographical book the actress of Collateral And Matrix Reloaded she would be willing to tell her version of the events that happened in the last season and beyond. The book will tell in detail about her life, quite intense, and some aspects of her controversial relationship with Will Smith

Looking forward to next fall, the entire Smiths showed up in front of photographers for what is the actor’s first real public outing. King Richard from the events of last March

WATCH VIDEO: Will Smith, who are his children Jaden, Willow and Trey

The couple’s three children, from left Trey (30), Willow (22) and Jaden Smith (24) posed with their celebrity parents for photographers at the entrance

Will Smith: ‘I understand if the public isn’t ready for me to come back’

Emancipation, Will Smith at the preview of the film with Rihanna and ASAP Rocky

Will Smith apologizes to Chris Rock for Oscar slap VIDEO

Both in dazzling form Will Smith and his wife unleashed their Hollywood elegance. For the event Jada Pinkett Smith wore a couture creation by Stephane Rolland and KatKim jewels

In the interviews released before the release of the film, Will Smith was concerned about the reception of the film that sees him as the protagonist in the light of all the discussions concerning him that took place in the last season

The actor, however, said he was very concerned about the team working on the film. The first to suffer, in case of an unfair reception, would be the director Antoine Fuqua who, according to Smith, would have made the greatest work of his career

emancipation is a very powerful film that tells the story of Peter (Will Smith), a slave, who escapes from Louisiana to find his freedom. Before landing on the small screen, the title will be released in cinemas

In emancipationtogether with Will Smith, a leading role also belongs to Ben Foster who posed with his set mate for some photos