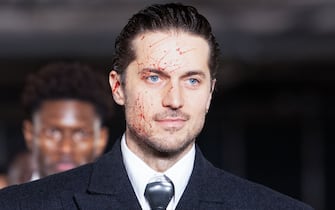 The blood splatters on the face did not distract the guests of the Louis Gabriel Nouchi show, the French clothing brand also known as LGN, from the charm of Lucas Bravo, guest star at the presentation of the Fall/Winter 2023-24 collection on the calendar in Paris Fashion Week in January. The actor of Emily in Paris opened the fashion show

Bravo walked the catwalk set up at the Garage Amelot in Paris with a look inspired by Patrick Bateman, protagonist of American Psycho, 1991 cult novel by American writer Bret Easton Ellis. From the title, which soon became an international bestseller, the film of the same name directed by Mary Harron was taken, which helped to increase the fame of its main actor, Christian Bale, as well as other projects, sequels and spin-offs

Bateman, who is a successful young banker but also a heinous serial killer, sports the typical look of a Wall Street businessman. The French designer, who is often inspired by literature for his creations, mixes men’s suits with ties with garments borrowed from the thriller and horror film universe in this collection. Even Lucas Bravo, with his shirt and tie and black maxi coat, inspires a certain fear

Emily in Paris, the cast of the series with Lily Collins

The sophisticated elegance of the dark overcoat and formal wear blends with a sense of anguish and danger that is made evident in the addition of fake blood on the faces of Bravo and the other wearers. This is also a clear reference to the work of Ellis because Bateman, in the novel and in the film, stains himself with the blood of his victims

WATCH THE VIDEO: American Psycho, a TV series in development

The mood of the collection is not only suggested but is underlined by many details of the garments and by the mix of fabrics that sees the addition of plastic, latex and vinyl – materials that evoke the bloody images of history – for the gloves, the t-shirts , trousers. In the look brought to the catwalk by Lucas Bravo there is no shortage of shiny patent gloves, which recall the nocturnal and underground atmospheres, and even the tie knotted on the white shirt is packaged in opaque plastic material

Emily in Paris 3, the photos of the new season

Lucas Bravo is perfectly at ease on the catwalk. Alongside his acting career, the 34-year-old has always worked in fashion appearing in numerous advertising campaigns. Since 2022 he has been the testimonial of the Persol brand of eyeglasses and sunglasses

Emily in Paris 4 will be done: the previews of the creator Darren Star

Requested by the world of cinema and TV, Lucas Bravo is now an acclaimed sex symbol and thanks to the popularity of his role in Emily in Paris (where he plays the talented chef Gabriel, the protagonist’s neighbor who falls in love with her), has also appeared on several covers of prestigious international magazines. Backstage at the show, he addressed designer Louis Gabriel Nouchi as a friend

On the catwalk, the actor kept a hint of a smile, an expression also assumed by Christian Bale in the 2000 film

Stefano Gianino, an Italian actor who was part of the cast of the second season of the acclaimed HBO show, also appeared on the catwalk in the same fashion show White lotus, title visible in Italy on Sky and NOW. Also wearing shiny gloves, he paraded with a sky blue look

The White Lotus 2. The trailer

Sought after by stylists but also passionate about fashion, Lucas Bravo regularly attends fashion shows, mainly as a guest. Last summer he was in Italy to attend the Giorgio Armani runway show during Milan Fashion Week

In October 2021, the actor was invited to the Parisian fashion show celebrating the genius of Alber Elbaz, former creative director of Lanvin, who died in the same year

Bravo has chosen Made in Italy and the creativity of Giorgio Armani for one of the most important appointments for him of last season: the world premiere of Ticket to Paradise, the comedy in which he starred opposite Julia Roberts and George Clooney. Here he is in double-breasted suit at the photocall

Here is the actor next to Julia Roberts. In the film Bravo she plays the boyfriend of the Hollywood star younger than her