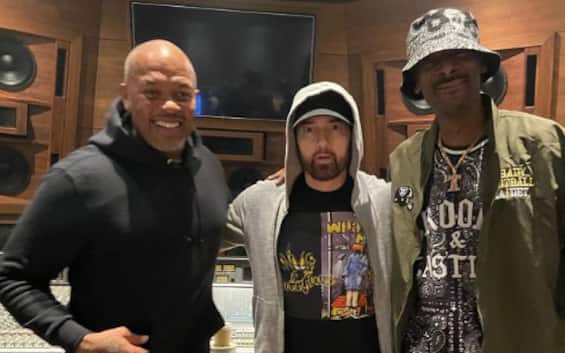 Three friends and colleagues found themselves inside a recording studio. In the past few hours Eminem shared a shot in the company of Dr. Dre And Snoop Dogg without however releasing information about it. Great curiosity from the public.

In February of this year, the three artists ignited the audience with their performance at the Super Bowl Halfitme Show, with them also Mary J. Blige And Kendrick Lamarsurprise present 50 Cent And Anderson .Paak.

Snoop Dogg, Dr. Dre and Eminem have now attracted media attention for the shot shared a few hours ago by the voice of Not Afraid on the Instagram profile from over thirty-six million followers.

The photo showed the three artists inside a recording studio, this is the text in the caption: “Only a few friends… coming out”.

Within a short time, the shot received numerous comments and more than one and a half million likes.

Among the most famous songs of Eminem we find without a shadow of a doubt The Real Slim Shady, Without Me, Lose Yourself, When I’m Gone And Rap God.