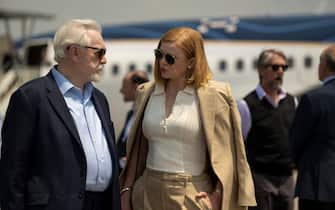 The 2022 Emmy Awards ceremony will take place on the night of 12-13 September. Among the nominations we find several TV series visible on Sky and NOW. Succession, now in its third season, has received 25 nominations. The fourth season has started shooting a few days ago

WATCH THE VIDEO: Emmys 2022, the nominees for the main categories

The miniseries The White Lotus, set in an exclusive Hawaiian resort, it was so successful that it reached 20 Emmy Award nominations. The second season of The White Lotusarriving in the next few months, was shot in Italy, specifically in Taormina

The second season of the teen drama Euphoriawhich explores the world of young people in all respects, received 16 nominations at the 2022 Emmy Awards

Euphoria, the photos of the cast of the TV series

The tv series The Flight Attendantstarring Kaley Cuoco, made a good impact in the recent second season as well. The actress received a nomination for Best Actress

The Flight Attendant, the second season kicks off with Kaley Cuoco on Sky

The protagonists Colin Firth And Toni Collette both received Emmy Award nominations for their performance in The Staircase – A suspicious deathTV series based on the true story of Michael Peterson, accused of killing his wife Kathleen

The Staircase – A suspicious death, the trailer for the tv series

Scenes from a weddingreinterpretation of the classic by Ingrid Bergman 1973, you see Oscar Isaac running for the Emmy Awards for Best Actor

Scenes from a wedding, the cast of the tv series. PHOTO

YELLOWJACKETS, the awaited series with Christina Ricci and Juliette Lewis

Finally, the latest TV series broadcast by Sky and NOW and nominated for one of the prizes up for grabs by the 2022 Emmy Awards is Barrydark comedy he sees Bill Hader among the protagonists

Barry, the review of the tv series with Bill Hader