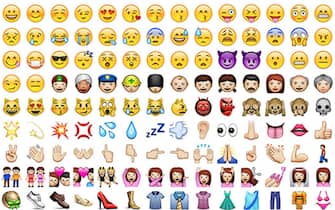 July 17 is theEmoji Daythe day dedicated to emoticons that we use every day in ours WhatsApp chat. They represent concepts, emotions, thoughts and serve to better understand the tone of what you are writing. But theirs is not always very clear meaning. Here’s a little one map to orient and understand what they represent

WATCH THE VIDEO: WhatsApp, service will no longer be available on some old iPhones

One of the most classic emojis is that of smile. They exist in different shadesfrom those like this, that they express satisfaction, to those who show off their teeth as a sign of happiness

It seems to be one of the most used absolutely: it represents an affectionate kiss. Despite the heartdoes not necessarily have to be used in love contexts, more often than not it simply is a sign of affection. There are several variantsfrom that heartless to that without redness

That of the heart is a symbol that definitely precedes the world of emojis. And the symbol of love and it is often also used to express gratitude, happiness, affection. The heart is an element that is part of several other emojisfrom that surrounded by hearts to the one with the famous heart-shaped eyes

There is one for each degree of laughterfrom that more composed until to tears, as in this case. They are often used in response to a joke or for underline the irony of what you are writing

The tongueyou know, is the sign of the spite and of joke. The chat offers avery wide variety of grimaces similar to this one. There is for all tastes

The most used emojis seem to be those positivebut they are not lacking those that serve to express negative emotionsas the sadness. Again, the selection is vast, with a simple face thoughtful to the one that bursts into a river of tears

This emoji instead serves to express impatience And rejection against something that has been said. Again there are different shades among which you can choose to manifest the feeling more right for each moment

When the time comes for the anger it is the case to use an emoji like this, which expresses disapproval, offense, hostility. It also exists in non-reddened version or with the smoke coming out of the nose

Here is a emoji which for obvious reasons he had a surge in usage over the past two years. It was originally used to express a generic disease conceptbut then it ended up becoming the symbol of an everyday life made of masks

In English it is simply said “facepalm”that means “hand on the face”. It is the symbol of a gesture that indicates frustration, dismay, embarrassment

The emojis dedicated to the language of the hands they are many, their meaning sometimes it changes according to the culturesbut the signs are the classic ones that we often use when we physically make our speeches. There is debate on that of the two hands touchingmany use it as a sign of prayerbut its original meaning seems to be that of “high five”

Many emojis represent inanimate objectssuch as i means of transport and in this case a train. They were selected on the basis of ours more frequent habits and of objects we encounter most often

Some emojis simply indicate a part of the body: there are eyesthe nosethe mouth and, as in this case, the ears

There are also the flags, one for each country. A symbol often used to mark a languageone national team in a sporting competition or to refer to one State

In addition to the classic ones we know by now, in September 2022 there will be new entriesannounced by the Unicode Consortium in July: among these the pink, gray or blue heart and the symbol of Wifi

Among the news of September there will be the “shacking face”that is the face trembling or, alternatively, that shakes the head

News also on the animal front: they will appear the moose and the donkeytogether goosea little bird black it’s a jellyfish