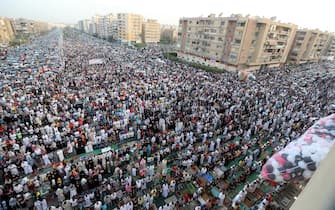 On Monday 2 May, hundreds of thousands of Muslims went to places of worship on the occasion of Eid al-Fitr (or Id al-frit), a holiday that marks the end of Ramadan, the month dedicated to prayer and fasting. It is one of the most important celebrations in the Islamic world and usually lasts three days. In the photo, Muslims outside the Al-Seddik mosque in Cairo

The celebrations are accompanied by banquets and the exchange of gifts, but they begin with morning prayer. Here the faithful inside the Al-Seddik mosque in Cairo

Ramadan in the era of smartphones, the fast between apps and social networks

On the occasion of Eid al-Fitr, some faithful also decorate the house and paint their hands with henna as in the photo, which portrays some girls in Peshawarin Pakistan

Jerusalem, clashes on the Temple Mount on the last Friday of Ramadan

Sunnis and Shiites: what are the differences between the two branches of Islam

These are instead the faithful gathered near the Great Baiturrahman Mosque, located in the center of the city of Banda Aceh, in Indonesia

This photo was taken in the same location, from above

Here we are always in Indonesia, but in Depok. The country is considered the largest in the world by number of faithful Muslims

TO Kuala Lumpurin Malaysia, some people prayed with masks

The holiday was also celebrated in Yemen, where a civil war has been fought for years. Here we are in the capital, San’a

Angelina Jolie in Yemen: “Here too there is a war that must not be forgotten”

To Hebronsome faithful gathered inside the Ibrahim mosque

This photo was instead taken outside the Al Amin mosque in Beirut, in Lebanon

In Sarajevo, some faithful gathered in the Gazi Husrev-beg mosque

This photo was instead taken in Sydney, Australia, inside the Lakemba Mosque