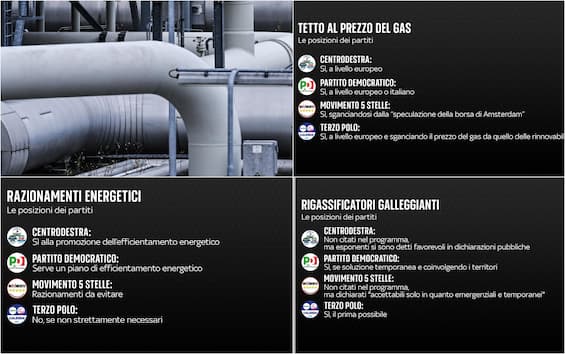 From the ceiling to the price of gas, up to energy rationing: here are the proposals, and the main differences, between the political parties in view of the vote on 25 September

On the subject of the energy crisis, there are aspects on which the main political forces are divided, as also shown by the programs of the parties in view of the elections on 25 September. From the roof to the price of gas, up to energy rationing: here are the main differences between the sides (THE SPECIAL OF SKY TG24 ON THE ELECTIONS – ALL NEWS LIVE).

Roof over the price of gas

On the possibility of introducing a cap on the price of gas, the center-right says yes, as long as it is at a European level. Yes also of the Democratic Party, both at EU and Italian level. The M5s agree, freeing itself from the “speculation of the Amsterdam stock exchange”. The Third Pole says yes to a European-wide ceiling, but disconnecting the price of gas from that of renewable energy.

On the issue of the use of floating regasifiers, however, the center-right does not mention this option in its program, even if some exponents said they were in favor. For the Democratic Party the option can be followed, if temporary and involving the territories. The M5s does not mention floating regasifiers in its electoral program but has declared them “acceptable” only if “emergency and temporary”. And the Third Pole? What comes from Action and Italia Viva is a “Yes” and “as soon as possible” .

On rationing, that is, on the forced reduction of consumption, the center-right is in favor of promoting energy efficiency. The Democratic Party also speaks of efficiency, according to which a plan is needed in this direction. While for the M5s rationing is to be avoided, as well as for the Third Pole, unless strictly necessary. It should be emphasized, however, that in none of the political programs is the expression “energy rationing” which, in any case, increasingly promises to be a possible reality for the coming winter.